Why Are Our Hidden Masters Mutilating Our Children?

Quote:
We are dealing with what may be the biggest medical and ethical scandal of modern times. Transgender medicine is big business, and youth who are transitioning today will be medical patients for life, for the next 60-plus years. Mental health among youth is at an all-time low, making them particularly vulnerable to solutions that suggest an ‘easy fix’.
The Biden administration has openly advocated sex change procedures for minors. Biden [said] that laws against this practice were “outrageous” and “immoral”.
On Transgender Day of Visibility, Biden’s Department of Health and Human Services endorsed sex change procedures for children.

Why? Well first of all, I suppose, because they are sick, perverted, evil psychopaths (I could go on!..)
who just enjoy torturing their victims.
Now that they’re in power, the world is their oyster!
So it’s no wonder we’re being assaulted on a thousand fronts - forced deadly vaccines, hordes invading our borders, our energy supplies cut off, and now our children groomed and mutilated.
Welcome to the communist takeover.

From the article cited and linked:
England shut down its only clinic that provided transgender procedures to minors in July, over concerns that doctors were performing procedures without considering the mental health of the children. The move came after an independent review had found that doctors at the clinic were pressured to “affirm” a child’s transgender identity unquestioningly.
England’s National Health Service (NHS) advised against social transition for children, and banned puberty blockers in most cases in October. The NHS said it was also developing plans to restrict sex change treatments for children due to “inconclusive evidence” of their effectiveness.

AND YET:
Britain’s Conservative (Tory) Party is planning to make it illegal to provide “conversion therapy” for individuals who identify as transgender, reports suggest.
It will soon be illegal to try and change a transgender individual’s “gender identity” — described as “conversion therapy” — in England, with the country’s Conservative Party now said to be preparing a bill that will ban the practice.
The coming bill represents only the latest of the Tory government’s many pro-transgenderism manoeuvres, with the party frequently empowering gender ideology at all levels of British life, despite the dangers it often poses to biological women [to every victim of it!].
According to a report by broadcaster ITV, the bill is also set to make it illegal to try and change someone’s “gender identity”, a key tenet of transgender ideology.

Read it all here: 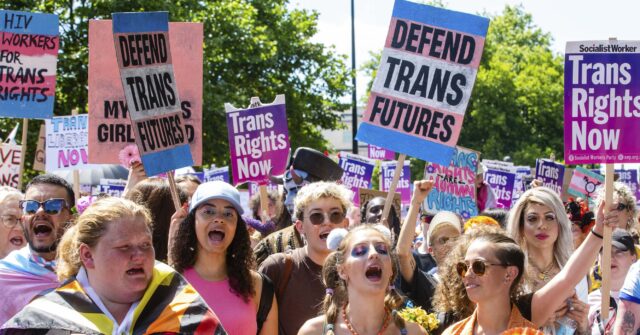 Britain's Conservative Party is planning to render it illegal to provide "conversion therapy" for individuals who identify as transgender.

So in Britain - no longer a free speech country - you will not even be able to protest against the practice of sexual mutilation.

It’s as if Western governments want their whole populations to be sterilized.

Far from trying to reverse the falling birth rates, they are actively trying to prevent birth by campaigning and legislating for abortion and sterilization. 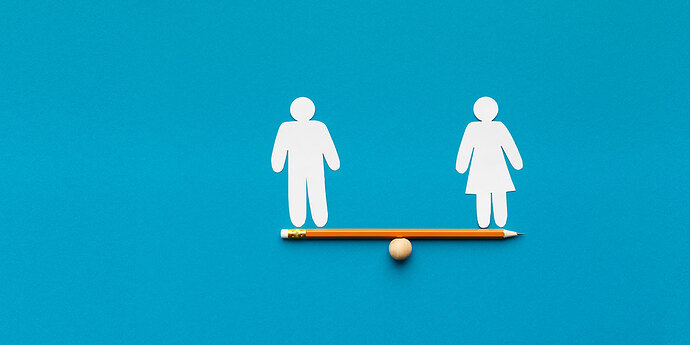 Pursuing bans on drugs and surgeries may not be the most pragmatic approach—lawmakers should instead consider these eight avenues.

It is written by people who are not for the practice of child “transgendering”, but see how seriously they take the subject!

Regardless of all the arguments of doctors, I insist: “Gender dysphoria” in children is a whim, not a sickness needing medical cure.

Gender dysphoria is a “whim” that’s entirely created, encouraged, and promoted by our own government, entertainment industry, education and medical “professionals”!
If this made up crap wasn’t being shoved into our childrens brains every waking moment, they might actually have a chance of being normal.
But that’s not in the “social engineering” plan of our psychopathic overlords. No, they’re doubling down on it and making it a crime to even object to the idea!
I guess Orwell would be jealous of this plot.

Notice also the whim of ADHD and Autism that adults “actually might have” and how this new victim-hood is showing up all over social media. I think it will be far worse than the whim of everybody is Bi-Polar.

Quote:
Rachel [formerly Richard - ed] Levine, now Assistant Secretary for Health in the Department of Health and Human Services, communicated with and encouraged various groups that were fighting against Pennsylvania legislation that would have blocked taxpayer funding for child sex changes in 2017, according to emails and social media posts.
Pennsylvania has spent at least $16.7 million on child gender transitions since 2015, with annual spending soaring from about $70,000 in 2015 to more than $3.9 million in 2021, according to Pennsylvania Family Council." 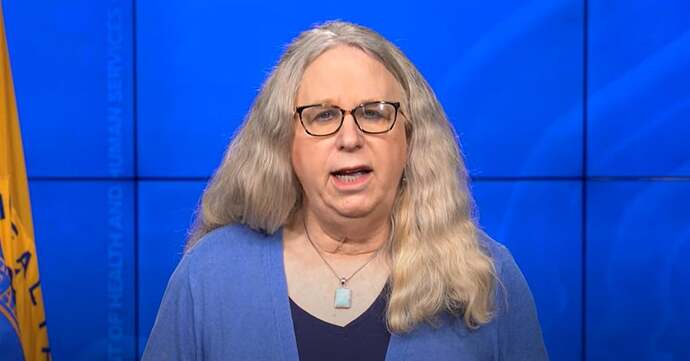 Rachel Levine, now Assistant Secretary for Health in the Department of Health and Human Services, communicated with and encouraged various groups that were fighting against Pennsylvania legislation […]

Well, anyone could see that coming a mile away. That’s the whole reason Levine was given that job to begin with. Same reason Mayorkas heads the DHS - to ensure that the left’s radical agenda is put on the fast track.
They both work to accomplish the destruction of what their position requires them to protect - Health for Levine, and Homeland Security for Mayorkas.

“We are dealing with what may be the biggest medical and ethical scandal of modern times. Transgender medicine is big business, and youth who are transitioning today will be medical patients for life, for the next 60-plus years.”

Two of a number of examples of disastrous results of “transgendering” surgery given in the linked article:

“A woman who identified as a man, received phalloplasty, that is a surgically constructed artificial penis built out of the skin in her arm. She “suffered seven surgeries, a pulmonary embolism, an induced stress heart attack, sepsis, a 17-month recurring infection, 16 rounds of antibiotics, three weeks of daily IV antibiotics, arm reconstructive surgery, lung, heart and bladder damage … $1 million in medical expenses … I spent many nights in the bathroom in too much pain to even make it to the toilet, forced to urinate on the floor, screaming as what felt like razor blades left my body”.

[A certain “tansgendered” person] now has to spend a great deal of time attempting to go to the bathroom, and doing so causes great pain. He is incontinent and his entire groin is numb. “I am never going to be the same ever again. There is no reversal to this. Do not let anyone tell you that this can be reversed.”

In reality, no one ever “transgenders”. No one ever can. There are only two sexes (“gender” is a grammatical term) and everyone remains the sex they were born no matter what is done to their bodies. A baby’s sex is not “assigned” to it, as the “transgender” fanatics claim; he or she is born male or female. And the male or female he or she is born, he or she remains for the whole of his or her life, no matter what is done to his or her body.

Yes, the biggest medical and ethical scandal in history - and that’s saying alot considering how many of them it has to compete with.
We defeated the Hydra in WW2 and it came back with a thousand heads.

Quote:
The only reason drag shows have been exempt from the ‘adults only’ list is because these events fall under the umbrella of LGBT culture and promote a ‘social justice’ agenda of not just tolerance but acceptance, even for children. This notion has shielded drag events from criticism and any such criticism has been deemed as ‘hateful’. The hosts of these ‘family-friendly’ drag events know that in today’s society, as long as you hold a rainbow flag up while you do it, as long as you identify as an oppressed ‘marginalized’ group, the rules don’t apply to you.

Yes, so now those practicing every form of perversion - including pedophilia - are going to demand their “rights” as “marginalized” groups.
The “gay rights” of decades ago was just the tip of the camels nose - now the entire camel has taken over the tent.

Quote:
The Do No Harm study explains that some of the increase [probably all – ed] in “transgender” identifying children might be explained by fad being a “social contagion”.
“According to this argument, the increase in interventions for adolescents is caused not by an authentic increase in the incidence of gender incongruence but by the spread of gender ideology across all facets of American life,” the study continues. “This concern is exacerbated by the degree to which the medical establishment allows such ideology to compete with or even usurp the scientific method as a guide to research and medical practice.”
Indeed, the American Academy of Pediatrics has advocated an “affirm-early/affirm-only” policy since 2018, which remains the American medical standard in most states. 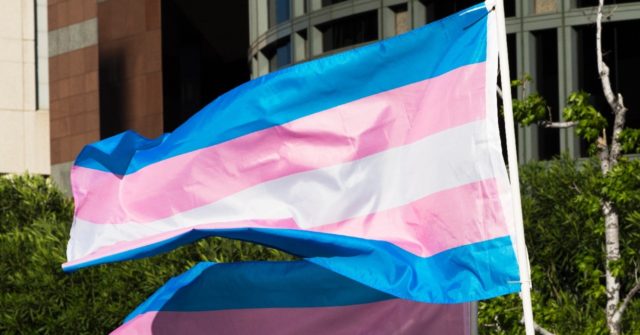 The United States is the "most permissive country" for child sex change operations and gender "transition" drug treatments.

Which proves that sociopathic, corrupt leftists have hijacked the medical profession and are using it to push their destructive agenda. They’ve also done this in every other institution - government, media, academia, science, technology, and business.
The parasite has taken over the host.

Good news continues to emerge here and there among the states:

She is the Republican governor of South Dakota.

Yes, in certain states, there is more hope, because of conservative governors. But others, like Arizona, had the chance stolen from them through fraud.

Liz, I don’t believe for a second that this monstrous moment in current time was ever part of a gay rights agenda.

Wouldn’t it be fair to say that there are gays and gays, agendas and agendas?

Yes, there are always agendas and agendas. But…homosexuals are being sidelined by the “gender is fluid” agenda that promotes gender alterations for everyone, who does not fit into the cis category. Plus, there are not a bunch of homosexuals in favor of trans-treatment for minors.