Quote:
For years [‘global warming’] scaremongers have been telling us that the Arctic would soon be ice free in summer.
Melting of Arctic ice has been used as a major data point in the justification of restrictive energy policies by many countries. It is ironic, and infuriating, that millions across the world are suffering from high energy prices and blackouts at the same time that Arctic sea ice has been at its greatest extent in many years.
This year and last has the largest extents [of Arctic ice] since 2013 and 2014, and there is considerably more ice around this year than in 2007 and 2008.
What is astonishing is that these buffoons are still in a job and living off the taxpayer. In any other field of science, to be so thoroughly wrong for so long would have quickly led to well earned oblivion. 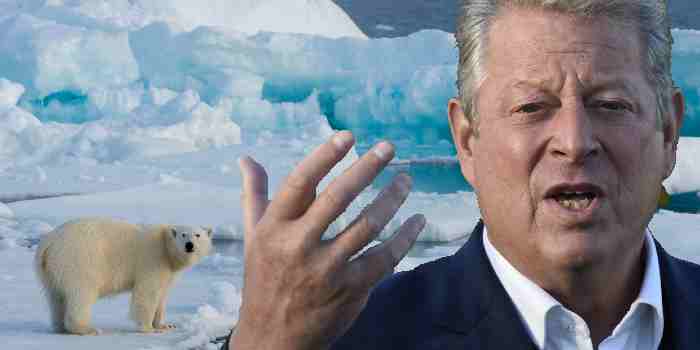 Has the great prophet Al Gore ever been right about anything?

That has never been the point…

Well they started the whole thing with “global cooling” alarmism, then switched to global warming.
They’ll probably just switch back to the “cooling” narrative and pretend like nothing changed.
Easy enough for them, just consider how many times Fauci changed his “scientific” opinion about masks!

What hasn’t been the point, Jeanne?

What is the point?

The point was never “to be right” about global climate. Al Gore’s point was to make money, garner prestige and lend a hand in controlling the populace…and make more money.

Ah, yes! Of course. You are exactly right! That is his aim, has always been his aim. And the maddening thing is, he’s achieved it. At the expense of millions of other lives.

Ah…I neglected to reply to Backwoods, so my statement was not apparent to others. Sorry about that.

I think the money is part of the mechanics that incentivizes the corruption and scientific malpractice etc. But I think the main purpose of Gullible Warming and Calamity Change is to destroy our viable energy supplies of all kinds, including nuclear – which is why the enviro-radicals oppose fission as well as fossil fuels. They’d like to prohibit the use of fire if they could, on the grounds that it releases greenhouse gases into the atmosphere.

How will the life they are trying to bring about for everyone on the globe benefit them? They too will be cold, isolated, hungry. Everyone’s life will be “solitary, poor nasty, brutish and short”. Have they not thought of that? Do they actually want that for themselves? Or … what are they thinking?

They only think what brainwashed “useful idiots” are programmed to think.

“They too will be cold, isolated, hungry … Have they not thought of that? Do they actually want that for themselves?”

They know they will be protected (in the most affluent, even lavish way) from the general immiseration they are tying to inflict on the free world in order to defeat it. Secretary of Energy Jennifer Granholm will not want for electricity or petroleum, even though it is her job to deprive the general public of them. Secretary of Transportation Pete Buttigieg will be able to go wherever he wants, even though it is his job to bring everything else to a standstill. Incompetent as he is, his job will be made very easy if Granholm does her job, with help from Biden or whoever his handlers are.

Do you remember “I, Pencil”? How many people it takes to produce a pencil? How many industries, how much raw material, how much transport ? How much more of all that, how many more workers, to produce a car, the refined petroleum or the electricity to make the engine work; systems and energy for central heating, for air-conditioning; … etc. etc. Where will be the personnel, the materials, the transport for the production of clothes; for soap and tooth paste; the skilled workers plus all the rest to make medicines; the miners to dig up rare earths and everything needed to make computers, telephones… etc. etc. No, if hoi polloi will own nothing, if they will be eating bugs, if they will be cold, unhoused, insecure, afflicted with untreated diseases, there will be no industries, no transport, no skills, no factories, no farming … etc. etc. The Granholmes and Buttgieiges will have to be served and sustained by millions of ghosts, working in ghostly factories and farms and laboratories, because the hungry, shivering, homeless savages who were once the nations will not be building, or making, or cultivating, or moving, or maintaining anything for them.

No ghosts to serve them? Then they too will be cold, isolated, hungry …

Yes, exactly.
I noticed Greta Thunberg has dropped the climate pretenses and is now calling for the destruction of capitalism. She’s the epitome of a useful idiot.
Surely they can’t all be that stupid?
But they are, ultimately, because they’re setting in motion their own destruction.

I, Pencil and all – fair points, for sure. But somehow Stalin and Mao managed to starve millions while staying comfortable in their own protected enclaves. That’s what I was suggesting. If Granholm, Buttigieg and their elite comrades (Mayorkas et al.) can feel confident they’ll be taken care of despite their attacks on the general welfare…But I agree – everything else will break down. That’s their objective.

The USSR tyrants had the capitalist world to keep the wheels of civilization turning. So they could keep their non-economy going for a while. Amazingly they did it for some 70 years! But the Great Resetters plan global overlordship. Best analogy - the Maharajahs of India, enriched by robbing the lower castes. When nothing is left for them to plunder …

Yes, that is their objective. It’s nothing new - the same old situation as it always has been - the sociopathic con-artists who get to the top by crushing everyone underneath them, only now its on a global scale.

These elites have already prepared a redoubt for themselves and their families. A small island here, a mountain retreat there. All off grid, all highly protected, all fully stocked and all EMP proof to survive the wars of the former civilization as they kill off their populace. They will rule until it is time to bug out to their sanctuary.

It might work for most of them. Why wouldn’t they do it?

Then their kindred will inherit the Earth when all is quiet.

That’s a fascinating dream you have had, dear Jeanne. A Disney story.

It reminds me of the Nordic dream of Valhalla. There the gods and the souls of heroes spend “everlasting time” sitting round a gigantic table forever feasting on delicious food and drink. They do not need to grow food, or cook it, the gods simply create the gourmet dishes and cocktails ready to eat and drink whenever they want to. But it is a terrible fate they are self-condemned to. They have no escape. They cannot die.

When the luxuriating elite of your dream get bored - which they will - they can die. Or leave the island or mountain and go to join the savages in the outer wilderness. I’d give them a maximum of seven years before unbearable boredom breaks up their earthly Valhalla. And that’s for the most enduring. Some will probably manage a year at most before committing suicide, joining the savage tribes, or going bonkers. There is also the high possibility of an annihilating civil war on the island or mountain.

But (I concede) that’s to think of them in terms of reality. A Disney dream could keep them living “happily ever after” in Never-never-land.

I think you underestimate the buying power of global elites and lesser elites to get what they want. They only have to prepare to live off grid and to stock pile tons of supplies in a redoubt. They have access to that sort of buying and planning.

Then they have to wait. Perhaps they wait in groups that have pulled together for this survival. If the masses have ruined the Earth with their unchecked propagation and their reliance upon fossil fuels, then the powerful are prepared to wait out our demise at global war or climate change and planet renewal.

Yes, it is a dream, but it is a planned dream. Why shouldn’t They inherit the Earth? They are the only ones that cared to force the sacrifices upon humanity. This is their dream that is under their control, is it not? They are “owed” this.

Is that truly too far fetched to reason that they might be doing this?