A man stripped down to his underpants (or entirely naked) is found in the middle of the night in the bedroom of Paul Pelosi while Mrs Pelosi is away from home. There is no sign of a break-in. The man and P.P. are having a fierce fight. P.P., afraid for his life, has called for help. Police come and stop the fight and get both injured men to hospital.

Q. How to explain the man being undressed?
A. Say he is a nudist, so always undressed.

Q. How make it seem that he is a right-wing Trump supporter whose intention was to harm Nancy Pelosi for political reasons?
A. Claim that he shouted “Where’s Nancy?” and point out that that’s what a MAGA Trump supporting “white supremacist terrorist” shouted during the “insurrection” in the Capitol on January 6, 2021.

But what does it look like on the surface without those farfetched “explanations” from an unnamed source?

It looks like a quarrel between Paul Pelosi and a gay sex partner.

This is not a story about a right-wing terrorist seeking Nancy Pelosi, the Speaker of the House of Representatives. This is a scandal following closely on the recent scandal of Paul Pelosi driving when drunk into another car and injuring people and a judge letting him off lightly.

How far will the media go with lies to protect that vindictive woman Nancy Pelosi from the taint of her husband’s dissolute behavior? Will they succeed in covering up facts which would harm the Democrat Party just before the mid-term elections?

Yes, this is just weird no matter how you look at it. So much that doesnt add up. But what really doesnt add up is that a wierd hippie nudist is also a “right wing extremist”. Suuuure, FBI!

It is now reported that he is a Green. Distinctly left.

The Pelosi house is guarded. The "intruder"must have been known to the guards if there were any on duty and awake. He entered through a garden door, unimpeded. Seems very likely he had been there before, more than once, and knew what entrance to use.

Much has still to emerge. Meanwhile - reasoned conjecture …

Yes, too much that doesn’t add up. Also he was referred to as a “friend” of Pelosi?..
Obviously they used it as an excuse to blame the Right, but if was staged, why did he bash him in the head?..

Naturally, media are claiming Mr. DePape is a far-right MAGA extremist election denier who was there to harm the wife, “Where’s Nancy”. Right - A nudist, far-right MAGA extremist… who was a Green Party activist, and… (stay tuned). The authorities may be telling him, “You play along with our narrative and things will go a lot easier for you than if you tell the truth.”

When I heard Paul’s “friend” David DePape was a nudist, I couldn’t help but think of this infamous photo of Hunter – which is not all that easy to find online any more. This came from an Etsy page selling a Hunter doll with paraphernalia like the underpants, the red sash, crack pipes, toy money, toy laptop computer, etc. By the way, if you post the photo of Hunter on Facebook, you will get a 3-day restriction for attempting “to share a private, intimate image … without permission from the people in the images” 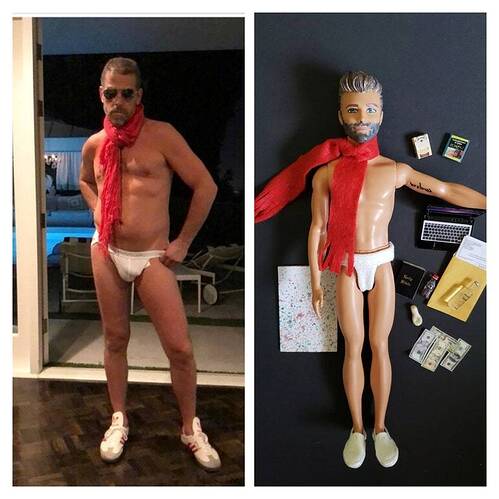 Is that a tiny condom above the bills?

I have never seen this photo and it is disturbing on so many levels. How exactly is this attractive to women? Does Hunter swing both ways?

Thanks so much, Damon.

Isn’t it a crack pipe? I’ve never seen one so I don’t know, but Zerothruster says they are in the kit.

Actually, it looks more like a balloon… I have never seen a lot of things, and now this photo of this dysfunctional can be crossed my list!

Wow, you missed this photo? It was all over the place for awhile! He’s more obsessed with exposing his anatomy than Kim Kardashian.
(In case you missed it, she’s the one famous for torturing us all with selfies of her giant butt for what seemed like decades…)

I agree with Jillian. I saw it and thought it was some kind of pipe or more likely a spoon to hold over the fire, or something like that. I guess we’ll have to ask Hunter when we have him next year.

We should realize that the radical left has exploited our emotional reactions, among them, disgust – to distract us, to demoralize us, etc. So when we see shit like this, we should instead react with mirth, if possible.

actually its probably not far from normal anymore in San Francisco.

So I just read that the websites attributed to this guy were created on Friday, then disabled on Saturday. That explains alot that doesn’t add up here, such as why a homeless drug addicted nudist would also be a “right wing extremist”.
He obviously wasn’t - but the FBI wants you to think so! They’re always on the alert for any situation they can exploit to push the “Trump supporting violent far right extremist” narrative.
Oh, and especially right before an election, just like the Whitmer “kidnapping” right before the last one.

I don’t spend much time online and none looking at celebrity photos…well, there was that Clint Eastwood collection from his Rowdy Yates days to the present that made the rounds on FB…heavy sigh.

Yes, he does look ridiculous, but in a creepy way. Ah…Halloween!

The naked man in Paul Pelosi’s bedroom in the middle of the night lives in Berkeley, in an old school bus, with rats and snakes, in a hippie commune that supports 'Pride", and BLM, and Aids, and nudism, and pedophilia. His husband is a pedophile and they have some slave children. Newsom plans to honor him with a medal or something, not for sharing a hammer with Pelosi and enjoying some S&M sex with him, but for giving the media another opportunity to blame Trump for the violence.