A Routine Execution In the Name of Allah the Merciful

Quote:
In shocking footage which has plumbed to new depths of depravity - even by ISIS’s sickening standards - the knife-wielding jihadist is seen slicing off the man’s limbs as he hangs helplessly from the wooden stake.

Comment:
Actually, nothing new here. Torturing to death is routine for Allah’s flock. 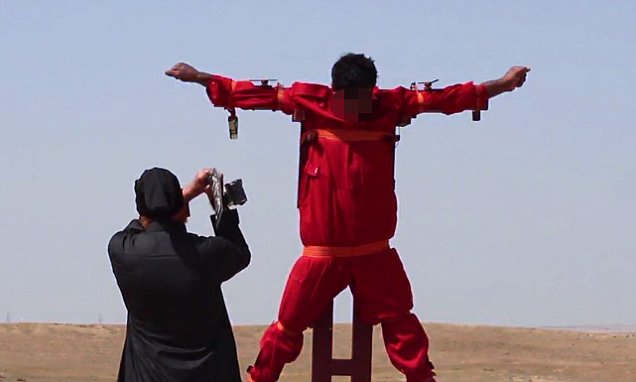 Islamic State militants have ratcheted up their savagery with a horrific video showing a knife-wielding jihadist slicing off the man's limbs as he hangs helplessly from the wooden stake.

And frankly I’m surprised this didn’t start sooner, with Biden in charge, giving away Afghanistan and an entire army’s worth of military equipment to the Taliban.

Sadly, only a tiny fraction of such atrocities become known outside of Jihadi enclaves. This sort of barbarism is routine in any area controlled by Daesh, Taliban, and groups which embrace similar ideology.

I know your testimony is accurate. I’ve been given firsthand (actually boastful!) accounts of the agonizing execution of civilians, even of children, by Muslim soldiers and jailers, and I’ve seen videos of prolonged torture by ISIS. Any non-Muslim adult who is not “'Islamophobic” must be insane, retarded, ignorant, evil, or lying.

Yes. Actually, I think it’s impossible to be “Islamophobic”, because a phobia is an unfounded fear. Fear or hatred of Islam is very well founded - it is proven to be so every day, with every one of countless barbaric crimes that we see such as this.

Although I certainly share your negative feelings about contemporary Islam as it is practiced in many parts of the world, my attitude towards contemporary Christianity is more positive only because it has at least temporarily ceased its more extreme practices. At their root, Christianity and Islam share many of the same intolerant and even brutal beliefs. The various Inquisitions (the most well-known of which was the Spanish Inquisition); the witch trials conducted in various countries at various times by both Protestants and Catholics; the brutality visited upon Catholics by Protestants and vice versa as the throne of England changed hands; and the horrors inflicted on “pagans” and “savages” by Christian missionaries and Conquistadors were every bit as brutal and evil as anything modern Islam does. I have a great many Christian friends, and I don’t hold the historical excesses of their faith against them, but I’m no more a fan of the tenets of Christianity than I am of the tenets of Islam.

Conversely, there are Muslim-controlled countries which are far more tolerant and even-handed than others. Yes, UAE technically has a penalty of death by stoning for crimes including adultery, but this sentenced has not been carried out in modern times and is usually commuted to a fairly short prison sentence. The few executions that are actually carried out in UAE tend to be for horrific crimes like the rape and murder of a young child, and I don’t have a problem with that.

Having spent quite a bit of time in Muslim countries, I have seen the best and the worst of that religion. Certainly, we must denounce Islamism (often called militant Islam or political Islam), and we must denounce torture and brutality committed in the name of any religion or political ideology.

It’s nothing to do with this of course:

“The recompense of those who fight Allah and His messenger, and seek to make corruption in the land, is that they be killed or crucified or that their hands and feet be cut off from alternate sides or that they be banished from the land; that is their disgrace in this world and in the Hereafter they will have a great torment.” (Qur’an 5:33)

It’s nothing to do with Islam!

We should hold the excesses of their faith against them where those excesses are justified by the religious texts. I will start a new topic on this question, I think its a very important subject, not least because apologists for Islam often use these excesses as an excuse for ignoring the barbarity that the Islamic texts call for. Briefly here though I will say that I think Christianity is more open to interpretation than Islam, to my mind Islam is very transparently and unambiguously a blueprint for harsh despotic rule.

I have posted the topic:

I have spent a bit of time in the past trying to debate on the question of whether the New Covenant overrides Old Testament barbarity. Few Christians today would call for adulterers to be stoned to death and so forth, even though this is explicitly called for in Leviticus: However is this because they now follow a more enlightened interpretation of the bible, or is it because they are ignoring what the bible actually says? For those not familiar with the New Covenant here is the Wikipedia p…

And I have replied there.

Your headline is tendentious!

I phrased it as a question so I’m not clear what you mean?

It assumes too much even though it is in the form of a question. That there was a “New Covenant” and that the Laws of Moses were barbarous.

The New Covenant exists as an idea, and you have mentioned it yourself. I don’t see how merely mentioning the idea implies any more than an acknowledgement that Christians have such a concept?

There are a lot of questions I’m really hoping to find answers to here, so please accept my post in the spirit I intended it, as a quest for understanding and not a statement of any “truths”, and please feel free to suggest a better title as well. I don’t have as much knowledge of the subject as you do, I’ve spent most of my life studying technical manuals, and I will study your links as well but it may take me a day or two.

A day or two would be making very good time considering that discussion of these nebulous notions has been going on for two thousand years and trillions of words have been written about them.