Absolutely DEAD ON Accurate- But the bright spot is that level of cluelessness is why the Useful Idiots are always 1st against the Wall, Lol… So, there’s THAT… 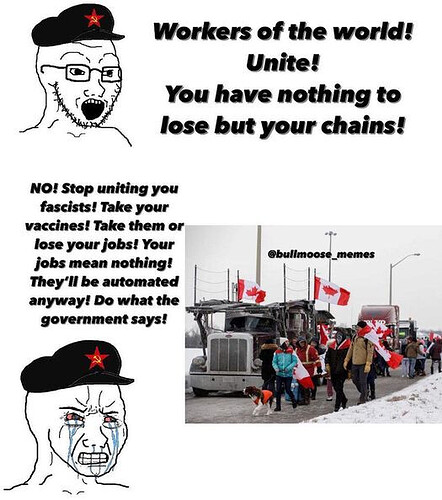 Ha! Yes, the commies have been caught in another ludicrous self contradiction here. Their glorious history of “Stick it to the Man”, Anti-Establishment, Question Authority, “Resist!”, blah, blah, blah, is coming back to haunt them, and bite them in the butt.

In Spades. It’s actually starting to cost them a large percentage of their older Base, too. It’s REALLY Hard to defend actual Authoritarian Fascism by screeching at people that THEY are ‘Nazis’, when it is clear to a blind man that 99% of People out here are nothing of the sort. Like the Jewish guy wearin the MAGA Hat in that Starbucks a couple years ago, that was EPIC Failure, hahaha— Actually SCREAMING at this poor old guy that he is a Nazi, and he turns out to be Jewish, and a Vet, as well. You can’t even make that level of stupidity up, lol. And even the ‘dumbest’ Regular folks out here are smarter than that, lol.
You can’t keep doing crap like that and have ANYONE, even IF they generally agree with your ‘Side’, actually take you and your ‘cause’ seriously.Frankly, they couldn’t have done a better job at alienating virtually everyone, if they had tried.

But The REAL problem, tho, are not THOSE clueless Useful Idiots- It’s the freaking WEF/Soros Infiltration of people who actually CAN effect actual, and damaging, changes. THEY are who are on my mind near constantly.

Yes, they seem to have infiltrated to the highest levels, and that’s not even counting the actual, flat out Commies we’ve had such as Obama as President, and Brennan as head of the CIA.