Will the EU Disintegrate?

It would be a good thing if it does.

Edited Quote:
Farmers in Europe have informed citizens that it will be difficult to find vegetables this winter. At the same time, the continent is headed for an obvious energy crisis. Yet the EU can’t see that the potential for food insecurity directly results from stupid climate policies, led once again by Germany. Going green at home led to a significant shortfall when EU governments could no longer fill their reserves with Russian fossil fuels.

Instead of recognizing the flaws in its strategy, the EU is doubling down. The Nitrates Directive remains in force, prompting some nations to limit the use of fertilizer or force the closure of livestock farms. The rising energy costs make storage and year-round production of vegetables nearly impossible for farmers. As Germans pile up firewood and French President Emmanuel Macron tells the French the age of abundance is over, the prospect of a cold and hungry winter looms.

Based on the concerns of “civil society organizations,” which is code for George Soros who is not allowed in the country, the EU’s chief dictator Ursula von der Leyen, is threatening to withhold funds from Hungary. Also from Poland and Italy.

What was supposed to be an economic union has evolved into an international governing body. How long until Poland, Hungary, and possibly Italy look at the feasibility of an exit? Just how long are culturally different nations supposed to put up with having the preferences of Germany and France shoved down their throats? 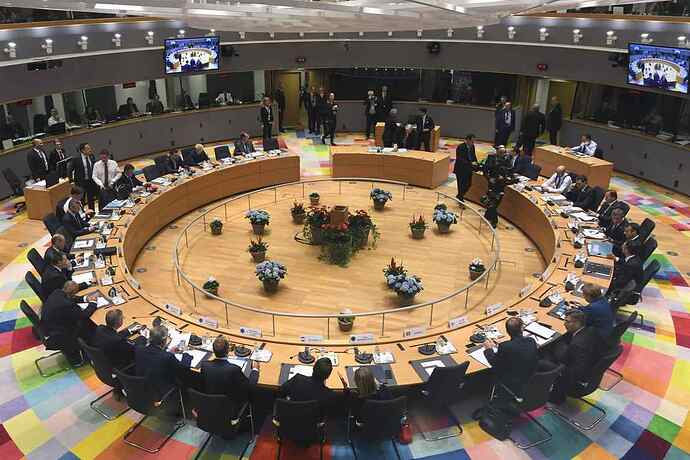 Could Current Events Lead to the End of the EU as We Know It?

As the EU seeks to punish countries that elect right wing or conservative governments, how many more "Brexits" could result?

Quote:
As a coalition of right-leaning parties stood poised to form a new government in Italy after Sunday’s elections, a group of Italian protestors reportedly torn down the European Union flag from the E.U.’s headquarters in Rome.
Giorgia Meloni, leading the conservative Brothers of Italy party, won the Italian national election on Sunday and is expected to form a coalition government with the right-leaning Forza Italia party led by Silvio Berlusconi and the League party led by Matteo Salvini.
Meloni, a powerful orator, has called for a naval blockade to prevent illegal immigration from North Africa to Italy. 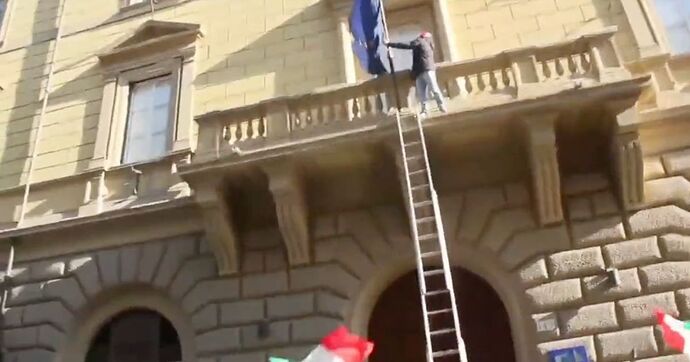 A group of Italian protestors in Rome tore down the European Union flag from the E.U. headquarters and replaced it with an Italian flag.

The EU “can’t see” the potential results of their stupid climate policies? Are they really that stupid?
I don’t think so! The results are part of the plan.
Does a giant boa constrictor “not see” that the harder he squeezes, the quicker you’ll die??

“… I don’t adopt a religious approach to any of this. … Why should I? I fight these battles because of secular common sense. … I want answers to these questions that are credible.”

She gave a great and now famous 13-minute speech to the World Congress of Families on 30 March 2019 in Verona (not in Rome, as the article claims). It ended famously with her quote from Chesterton “Fires will be kindled to testify that two and two make four. Swords will be drawn to prove that leaves are green in summer.” (from Heretics, 1905) to which in conclusion she added, “That time has arrived. We are ready. Thank you.” But something the Christian-based Congress needed to hear was this, about eight minutes into her speech: “… I don’t adopt a religious approach to any of this. I believe in God, but I don’t adopt a religious approach. Why should I? I fight these battles because of secular common sense. I am a person who asks myself uncomfortable and profound questions. And I want answers to these questions that are credible. And all too often the high priests of one-track thinking are incapable of giving answers that make sense.” I wish all of our religious conservatives allies were that sensible.

By the way, I made a full transcript of the speech from the subtitles provided by YouTube host and translator Cassius in this video… 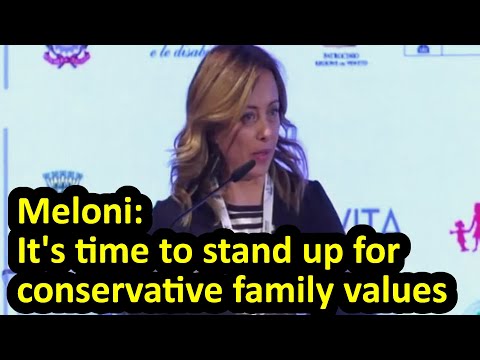 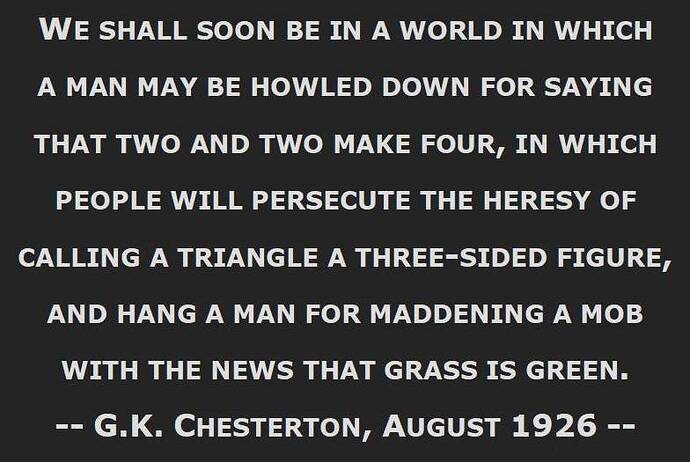 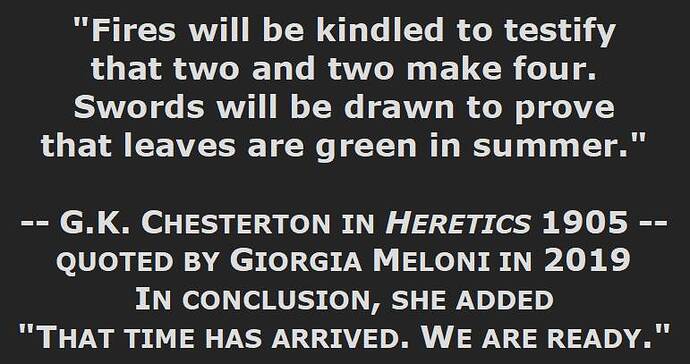 Thank you, Zerothruster, for bringing us this speech.

Is it possible that it is not too late for Europe to save itself if the nations vote more candidates like Meloni into power? If there are any more like Maloni!

I would like to make a post of this in the Forum, doing just the little editing needed to straighten out the context.

“Is it possible that it is not too late…” can be asked about the entire First World of industrialized nations of Europe, Japan, India, the Anglosphere and South America. But recent signs are looking better for that prospect – Brexit, Sweden, Hungary, MAGA, etc. The radical left has been stealing elections in the First World for decades. The coalition Meloni has to work with also seems promising with Berlusconi and Salvini.

I found the Chesterton quotes very ironic, as he believed any number of nonsensical things as a devout Christian. I wonder what he was thinking about the irony of that when he wrote those things. Did it even occur to him? Or was he being intellectually corrupt and cynical?

Judging from this speech, it looks like Maloni will be a much better conservative leader than the new British Prime Minister has proven to be so far.