It always seemed to me that something was amiss in the goings on of Ukraine/Russia/US and this “war” that the Biden Administration was involving us in. Yesterday, the new Imprimus came in the mail, and the article cleared up some misgivings that I had.

Here is the article: Complications of the Ukraine War | Imprimis

I read that, too. Gives a good overview of the history of it. Its interesting that George Kennan, himself one of the architects of the NATO alliance, warned that American plans to push NATO borders “smack up to those of Russia” was “the greatest mistake of the entire post Cold War era”.

Jeanne - Please tell us what your misgivings were, and how the Imprimis article cleared them up.

It seems to me that the author, Christopher Caldwell, while being very understanding of the Russian case for invading Ukraine, totally lacks understanding of why NATO had to respond to the invasion.

The question is: Should Nato - and that means the US - have done nothing? Or if something other than support Ukrainian defense, what should that something have been?

But NATO is smack-up against Russian borders in several places already.

From the internet:
NATO has land borders with Russia spanning 754 miles across northern Norway, eastern Latvia and Estonia, and the borders with Poland and Lithuania around Russia’s Kaliningrad region .

Also the border between Russia and Turkey lies in the Black Sea.

Maybe that’s why he thought it was a bad idea to push it even further.

Caldwell simply bangs the drum of Cold War political theory - replete with references to Kennan and Mearsheimer. In my responses to Yazmin, I argued against these views, which inescapably are appeasements of a dangerous war-mongering autocrat. The “Nato expansion” that purportedly triggered Putin to invade was a pretext, not a reality. He invaded because he saw weakness in Nato and the US.

One does not have to ennoble Ukraine or its leaders to make a solid argument that it is in America’s interest to send weapons to Ukraine to prevent Putin’s colonization and plunder of it. America has not sent enough missiles for Ukraine’s air defense.

I don’t think agreeing to keep Ukraine out of NATO would have been appeasement. It would have robbed Putin of his pretense, and possibly prevented him from invading in the first place.

By your reasoning, should Ukraine have agreed to be an oblast of Russia to rob Putin of his reason for taking it over by force? To suggest this pre-emptive surrender, you would have to believe in Putin’s fatherland mysticism: that the Russian and Ukrainian peoples are one and have a shared destiny as subjects of a Tsar …if they know what’s good for their souls.

“Stopping Nato expansion” is geo-politically equivalent to - in fact is a proxy for -“Allowing Russian expansion”. So, yes, robbing Putin of his pretext is appeasement - no different from the appeasement of Hitler’s reich-building ambitions by feeding Czeckoslovakia to him.

Should Finland’s application to join Nato be denied so the Putin won’t feel provoked by having a Nato member on Russia’s border?

No, agreeing to keep Ukraine neutral is not the same as “giving” it to Putin. It would have established a line that Putin himself had already drawn, and given a strong leader (such as Trump) leverage - something to hold him to and not go beyond. But Biden couldn’t pull that off, or wouldn’t.

Finland “belonged” to Russia from 1809, when it was captured from Sweden, until 1917. It was not part of the Soviet Union.

The Fins are a distinct ethnic group.

If Putin had been allowed to annex Ukraine, Finland was likely to have been one of the independent states next on his list. “Once Russian always Russian”?

Rumors are increasing that Putin is dying.

If he is, will Russia continue the war against Ukraine when Putin is gone? Unlikely. There will surely be a power struggle in Moscow. Too much urgent business to see to, no time to attend to a war. But how the hostilities will be stopped, on what grounds, with what pride-saving excuses by the Russians, remains - interestingly - to be seen.

The Russians themselves are a dying nation, almost halving with each new generation. Russia’s fertility rate is 1.5.

But then, Ukraine’s fertility rate is even lower at 1.22.

Looked at with those statistics in mind, the whole exercise seems amazingly futile.

How is extorting Ukraine not to join Nato “agreeing to keep [it] neutral”? What does agreeing to be “neutral” even mean in this context? Agreeing to being a sitting duck for Putin’s political and military machinations?
Any line Putin draws, Putin can erase. Borders are such lines. The only “leverage” on Putin is military strength and the willingness to use it.

My misgivings have been exactly what has happened, presaged by recent history of the Left in America.

From an article on National Review by Andrew McCarthy in February of this year:

" To repeat what I said at the time,

“The American government official who was at the forefront of disarming Ukraine was none other than Senator Barack Obama. The Daily Mail had the report back in March:"

“As a U.S. senator, Barack Obama won $48 million in federal funding to help Ukraine destroy thousands of tons of guns and ammunition – weapons which are now unavailable to the Ukrainian army as it faces down Russian President Vladimir Putin during his invasion of Crimea. In August 2005, just seven months after his swearing-in, Obama traveled to Donetsk in Eastern Ukraine with then-Indiana Republican Senator Dick Lugar, touring a conventional weapons site. The two met in Kiev with President Victor Yushchenko, making the case that an existing Cooperative Threat Reduction Program covering the destruction of nuclear weapons should be expanded to include artillery, small arms, anti-aircraft weapons, and conventional ammunition of all kinds. After a stopover in London, the senators returned to Washington and declared that the U.S. should devote funds to speed up the destruction of more than 400,000 small arms, 1,000 anti-aircraft missiles, and more than 15,000 tons of ammunition.”

“A press release from then-Senator Lugar’s office included then-Senator Obama’s puerile proclamation that eliminating Ukraine’s stocks of conventional weapons would ensure ‘the safety of the Ukrainian people and people around the world, by keeping them out of conflicts around the world.’””

The US and others have been dithering about a two state solution for Israel and Palestine for many decades. This happens during Obama’s and Biden’s leadership? And…the world teeters on the edge of war because of it?

Yes, I had misgivings. I submit that the Left and other Oligarchs knowingly used history to bring on their planned future for the West. Putin is not THE Ultimate Bad
Guy in this drama. I have great misgivings about the government of Ukraine, as well.

And, what was up with the failure of the meetings in Turkey? News is a cease fire or compromise was possible, but the deal went bust. 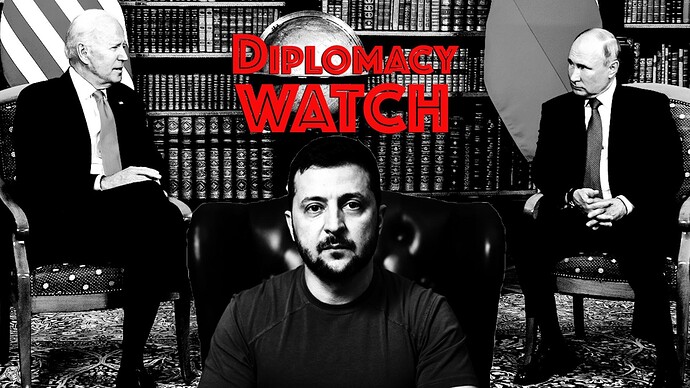 A recent piece in Foreign Affairs revealed that Kyiv and Moscow may have had a tentative deal to end the war all the way back in April.

I don’t know. I don’t know how to know what the secretive governments have at stake over this conflict.

Exactly my point - we have the military might to back up our side of an agreement with Putin.
That’s what would have prevented him from “erasing” that line if we had agreed on it through negotiations.
Instead, because of our present leader’s weakness and incompetence, we failed to use that might to hold him to any line at all - which invited him to take advantage of the weakness, and left us with no other option but to enter into a war.
Good leaders achieve peace through strength - not war. Being drawn into a war by a lesser power is the result of weakness and incompetence on the part of those who possess the greater power.

Jeanne - what you tell us about Obama disarming Ukraine is very interesting. The possible reasons for his doing so are mind-boggling.

But beware of Responsible Statecraft. It is a website of the Quincy Institute which is funded by George Soros. I do not think one should trust anything it says.

I would guess that we should be suspicious about what it says…what it means.

The former PM did visit Zelensky just after the cease-fire talks in Turkey. Are there any connections to the dots? If there aren’t, then what purpose is behind the article? Nefarious, no doubt.

To think that the only players in this war-game are Ukraine, Russia and the US is naive, don’t you think?

Jillian, don’t you remember him doing that and what a slap in the face it was to Ukraine, whom we had promised to protect from Russia if they would disarm? Obama’s decisions left them defenseless, and then Obama failed to act when they needed the promised protection.

Clinton, Obama, Biden; it is all the same foreign agenda.

My point was that Ukraine should have had the (conventional) military might to deter Putin’s from erasing its borders. The US, UK, Nato and any other sovereign European nations should have been supporting the Ukraine’s military (training and materiel) so that it could mount and sustain a credible deterrence against Russian aggression.

But Obama scuttled that deterrence. He handed Crimea to Putin on a plate, as part of his shrink-America-globally foreign policy. He withheld lethal weapons from Ukraine, to make it easier for Putin to occupy swaths of Ukraine.

“A press release from then-Senator Lugar’s office included then-Senator Obama’s puerile proclamation that eliminating Ukraine’s stocks of conventional weapons would ensure ‘the safety of the Ukrainian people and people around the world, by keeping them out of conflicts around the world.’”” (See Jeanne’s comment above.)

It appears that a number of people (Mearsheimers, Resetters, Soros, Peace in Our Time revenants, American parochialists) actually believe that offering paper security assurances to Putin will lead keep him at bay, and bring peace, security and stability to the world. They believe that the US should insert itself into peace negotiations by offering to do what? - enforce? guarantee? a neutral and demilitarized Ukraine. How? By promising (on what authority?) that Nato will never allow Ukraine membership in Nato? By promising to end (not binding on future US administrations or on other nations) all military and economic aid to Ukraine, and, for good measure, to cease and desist political “influence” campaigns ? And all in exchange for what? Russia accepting its pre-February 23 wins (i.e. Crimea and Donbas) and a promise not to grab more for as long as it feels its security is not threatened? When will Putin ever feel he is safe? Any agreement negotiated on these terms, notwithstanding the signatures of governments, would be - like the JCPOA (the Iran deal) - an utterly nugatory exercise, certainly failing as a binding legal treaty, but also as a contract, being the result of extortion and granting one party unilateral power to terminate it without penalty.

Boris Johnson is quite correct to say one cannot negotiate with Putin on the basis of security assurances. Any paper such assurances are written on is litter destined for the bin. The history of such deals - starting with the Budapest Memorandum, continuing through the Minsk Accords, and to the recent Turkey-brokered fiasco - teaches us a harsh diplomatic lesson: if the Western governments pretend that Russia needs to be supplied with ever stronger, wide-reaching and longer-term security assurances, up to and including disarmament and de-militarization of an independent nation to afford Russia a buffer zone in perpetuity, in order to agree to refrain from military aggression, they are effectively enabling and colluding with Russia’s militarism, cynically undermining the strength of their own military deterrence and cravenly betraying the security of the people of the “free” world.

Obama making that deal with Ukraine to demilitarize, and then failing to keep our agreement to protect them, was shameful.
If they had kept their defenses, it would have been a deterrence to Russia’s aggression.