“The goal of the left and Islam is to force all of the world’s people to submit to their ideology.”

The goal of the left and Islam is to force all of the world’s people to submit to their ideology.

The strange thing is, the film was written by a Muslim cleric!

That’s got to be one of Condell’s best!
He’s right that, whereas most Westerners were merely indifferent to Islam before, they have nothing but contempt for it now, thanks to getting first hand exposure to “the trivial things that offend [them], and the vile things that don’t offend [them]”.

Here’s more about the film, explaining why Muslims hate it though it was written by a Muslim: 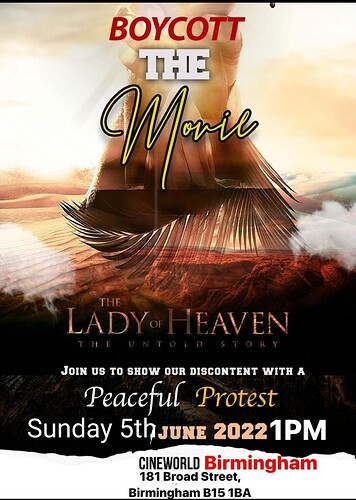 Once again, Muslim mobs in the United Kingdom have been offended by a piece of art, and have intimidated the theater chain Cineworld enough to stop screening the £12 million film, "The Lady of Heaven." The Western media has not yet grasped the full

The demands of bigots are law now in Britain.

That the political left supports and defends Islam seems, to me, a perfect example of the incoherency of leftist thinking.

The political left claims to detest religious extremism, yet they support Islamic extremism. They claim to abhor intolerance, yet they support one of the most intolerant religions. They claim that American conservatives are waging a “war on women”, yet ignore the institutionalized restrictions on women’s rights and freedoms imposed by many Muslim-majority countries. They falsely accuse every American conservative of racism, while ignoring the institutionalized racism and even outright slavery practiced in some regions under Islamic control.

This incoherence is not limited to the left’s relationship with Islam. They claim to champion women’s rights and to support what they term “reproductive choice”, but they adore and fawn over the communist government of China which, until last year, had very harsh penalties for women who bore more children than the communist government allowed. They turn a blind eye to female infanticide in China and India.

With revered icons of the political left frequently making blatantly racist statements and advocating racial violence, they have had to re-define “racism” to exclude hatred against light-skinned “oppressors” or against any conservative, regardless of skin color. This is the only way that they can continue to claim opposition to racism while overtly practicing racism.

The political left are masters of the double standard, and their stated beliefs are contradictory and incoherent.

Great points. Yes, their incoherence is due to the fact that they don’t actually believe what they say, because its all B.S., lies made up to push their agenda. Every group of people is just a tool to them, to be used till they achieve their goal of destroying society.

Yes. All true.
Could you imagine a worse life to be born into than that of a Muslim woman in – say - Morocco? As many millions are.
Genitally-mutilated, secluded, wrapped in a black tent, forced into marriage, illiterate, frequently beaten, liable to lose her children at any time, not permitted to go out to work, and not allowed to have medical treatment because doctors are male and may not even see her, let alone examine her. If ever a life was solitary, poor, nasty, brutish and short – and full of pain and sorrow - it is the life of this woman.
She can be divorced by her husband at his whim, and if she has no family to return to, can be abandoned to starvation.
Because of her clitorectomy and enfibulation, it is agony to menstruate and copulate, and childbirth for her is even more excruciating than it is for most women.
Her children can be taken from her. Her boys, even when they are little, can be sold into slavery, made to fight and kill, or to walk over minefields. Her daughters too can be taken as slaves, for a life of perpetual labor and sexual exploitation; or forced into marriage well before puberty, to endure the same life as she endures.
If she is raped she will be killed by her own male relatives in an ‘honor killing’; or, if condemned to be executed by the state for the CRIME OF BEING RAPED, she will be buried in earth up to her shoulders and stoned to death.
Of course feminists of the free world are up in arms about this, making a huge fuss about it at the United Nations and doing everything they can with passionate zeal and dedication to help their Muslim sisters – aren’t they?
Actually, no. Even to notice it, they pretend, would be “racist”. Because they are almost all on the political left. Leftism, for its devotees, trumps all; and the Left, though it brags of caring about the oppressed – indeed, that is it’s self-claimed raison d’être - is in reality compassionless, deliberately blind, ignorant, and cruel. 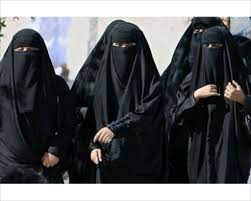 Some effort was made to ban the burqa in Morocco, but in the north of the country it is still worn:

And women have been put back into seclusion and burqas (the sort that even covers the eyes with a kind of grid), and condemned to the sort of life I have described, in Afghanistan since the “Biden” administration handed the country over to the Taliban .

A group of women in Yemen: 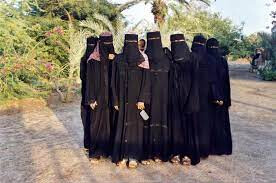 Islam regards a woman as a walking sexual organ which can usefully be put to doing chores. If it annoys its male owner he can beat it or kill it, and he can replace it with another one any time he likes.

Anyone know how Islam regards “transgendering”? As it is against homosexuality to the extent that it puts gay men to death, it might be expected to be against men who pretend to become women.

The difficult thing to understand would be why a man in Islam would want to become a woman when it means giving up his dominant role, his freedom, his legal privileges and submitting to oppression, losing legal rights, and risking being thrown down from the top of a tall building.

Historically, this attitude was not unique to Islam. Several religions, including Christianity, advocated a subservient role for women. It is certainly true that, today, such attitudes are perpetuated primarily in regions dominated by Islam. In nations such as Syria, Afghanistan, and Yemen, women are treated as property rather than as people, especially in the rural and more traditional areas of those countries. On the other hand, Islamic nations such as Bahrain, Qatar, and (especially) United Arab Emirates are far more supportive of women’s rights.

I read a paper by a US military medic, female, on the prevalence of pederasty amongst Afghan men. The practice actually predates Islam, and is more a Pashto cultural phenomenon than an Islamic practice. Islam of course forbids homosexuality, and stipulates the death penalty for engaging in it. But the Afghans don’t consider pederasty to be homosexuality. They engage in it, but eschew the label. There is a saying in that country, “Women are for child bearing, boys are for pleasure.” In her paper, she advanced the belief that widespread pederasty resulted from, or at least was exacerbated by, the cultural practice of keeping women from the sight – much less the contact – of any male except family members. With no access to women for sexual relief, boys are the next best choice for a great many Afghan men. During a couple of my deployments, we worked closely with Afghan Ktah Khas (counter-terrorism commandos trained by our 75th Ranger Regiment). According to one of our medics, about half of our Ktah Khas unit was sleeping with one another. But if you had called them homosexual, they would have been horrified and offended, and probably would have committed violence against you for impugning their honor (Pashtunwali).

That would seem to be a special Islamic form of cognitive dissonance.

So Afghan women, in addition to having to suffer all the injustices Jillian mentions, also have to endure living with men who are basically pedophiles. 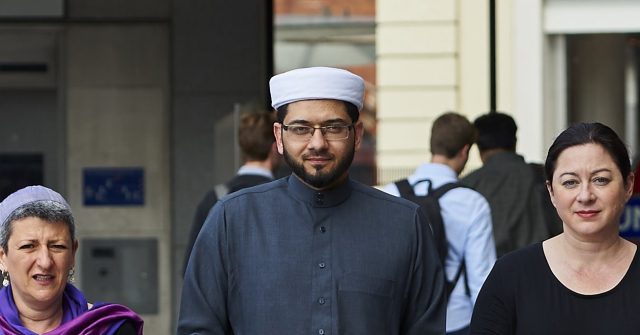 The imam has been dismissed over his work to see a "blasphemous" film about the daughter of the prophet Muhammad cancelled.

Wow, I can’t believe the British government actually grew a spine about this! Actually pushing back against their “Islamophobia” advisor - isn’t that (shudder) Islamophobic?! Pigs must be flying!