The Suspicious Rise of Nazism 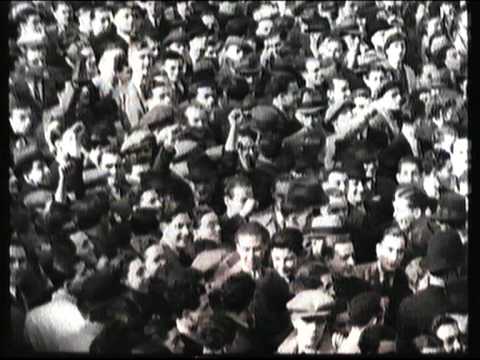 I can’t believe that Nazis and Hitler take the power in Germany without any help from a global power (or from a vast variety of international politicians and power owners like Henry Ford).
It’s a joke after about 300 years of “Enlightenment” in Germany from Kant to Weber, Germans decided to vote a cheap psychopath like Hitler. I doubt after 2000000 casualties in WW 1, Germans accepted a new military leader. Germany was in a disastrous crisis, why some people in Britain tended to join Nazi group? Like this video you watch: 4th October: The Battle Of Cable Sreet
Aren’t there any similarity between these gangs and today’s “Antifa” or other so called “Socialist”? Wasn’t a worldwide conspiracy to ignite the world like todays?

There is close similarity.

The greater part of the intelligentsia of the West supported the rise of the fascists, the Nazis, and/or the Russian Communists. Mostly the Communists, but among the wealthiest American and British upper classes, there were also many who liked Hitler and Mussolini. Some Western bankers aided Hitler. Roosevelt, while verbally opposing him, treated him as a friendly equal for far too long.

You are so right! For a hundred years and more now, the powerful of the West have been chipping away the precious liberty that generations had struggled and fought for, and now they’re destroying it with heavy blows and wrecking balls.

Unfortunately Reza Shah Pahlavi was cheated by Hitler as Iranians are Arians and have an original genes with Germans. Reza Shah betrayed Britain because Britain helped him to reach the power.

Were Germans really of Arian descent, or was that just Hitler’s myth?

Yes, and history is now repeating itself.

I don’t know exactly because thousands of cons and pros exist about this. But I think it doesn’t matter. Iranian generations are combined by Arabs, Greeks, Mongols and Turks and no one can claim that Iranians are Arians or the other races. Self ancient Iranians were from two races and cultures: Yamna (Arians with the origin from the north of the black sea) and Elamates who were in Iran from the first and without immigration. Elamates had 2000 years history when Arians came Iran in 500 BC. Which common origin can Iranians have with Germans when the Germans had no any history more than 1000 years? They were just tribes not civilizations. Maybe Germans are Arians but according to “Kurgan Hypothesis” the process of Indo-European cultures configuration were cyclic and too complicated to exactly claim about the destiny of Arians.(Like Celts and Scythians)

Yes, the Germans were just tribes when Iran was a civilization.

What you have written draws me to the history books to read more.

Excuse my late. I don’t trust to most of the Iranian history book writers, so many of them are radical blind nationalists, others are left and you can’t find an unbiased writers among them. Also, regime doesn’t allow to publish any books with some truths. All of my books are written in Persian and I don’t have their English translation. In addition, most of the working on the origin of Iran and Arians are completely related to Western researchers. Then the best resources for me is Wikipedia and other Encyclopedias like Encyclopedia.com with lots and lots of articles and links and references. [https://archive.org/]
[Aryan - Wikipedia]

You can enter the last address I added and then translate the whole of article to English by Google Translator.

Thanks, Fiangol. I will take your advice.

Also, I have many excellent history books and encyclopedias on my own shelves, and I will see what I can find there.