The Police Were Cowards

Edited quote:
The cops did zip for the kids being killed, but instead tased parents beside themselves with grief, to prevent them from charging to retrieve their own children.
Evil in action.
“Harden” the schools by creating one-door schoolhouses.? Just you wait for a fire, the stampede to follow and the bodies to pile up high before that single point of egress.
“Arm the teachers”? You want to train and arm teachers and faculty staff members to protect your kids? Have you seen what falls under the category of “teacher” and faculty these days? Have you seen these mountains of flesh videoing themselves gyrating obscenely, sexual exhibitionists under whose tutelage sexual curiosities, once called perversions, flourish? You want to give guns to the same “dedicated” pedagogues who took two years off for COVID?
Get your kids the hell out of U.S. schools!
American schools, incidentally, are well-capitalized. They have active-shooter training and security protocols in place. What they don’t have is decent human capital.
Decades of feminization, emasculation, and preferential hiring account for America’s low-intelligence, self-serving workforce, this malevolent matriarchy.
You are witnessing the systemic rot in end-state America. 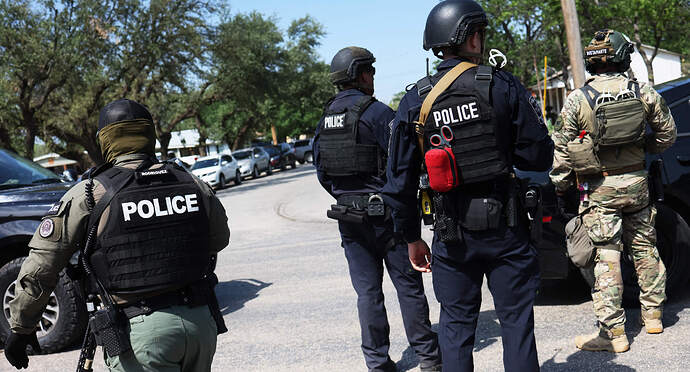 Last week we learned that a lady from Charleston had the male bits and the moral compass that upwards of 19 police officers, hunkered down at the Robb Elementary School in Uvalde, Texas—all SWATTED-up…

Amen - get the kids the hell out of the schools!
Even if we solved the mass shooting problem, they’re still in danger from the poisonous ideology they’re being brainwashed with, which is now the official doctrine of the State.