The New World Order: Lords and Serfs - Only?

Edited Quote:
The elites in America, joining with their counterparts in most of the rest of the developed world, are engineering a future where there will only be two classes: the elites and a permanent underclass.

The average IQ of Americans is shifting into decline. To explain this, we might start with: a degraded system of public education, a dumbed-down media, the diversions of mindless online rubbish, the collapse of meritocracy, and the replacement of the pursuit of excellence with the quest to acquire status and rewards by defining oneself as a victim. 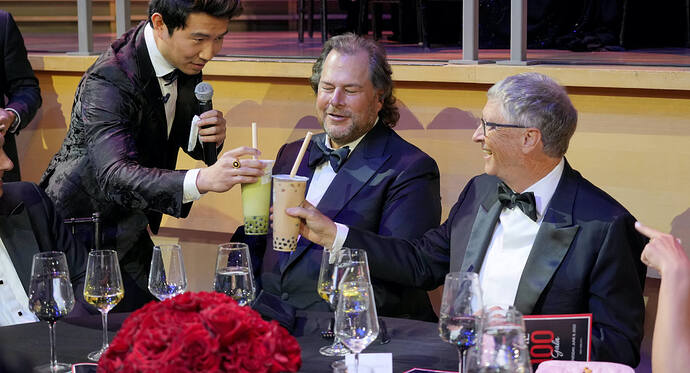 Why the Middle Class Is Being Destroyed › American Greatness

Nearly 30 years ago, Richard Herrnstein and Charles Murray published “The Bell Curve,” which became notorious for its chapter that highlighted differences in IQ test results by race.

And then you have the French Revolution…

If you mean that the French Revolution was a spontaneous uprising of the lower classes - no, it wasn’t. It’s hard to think of any such thing in all recorded history. Aristocrats, intellectuals, clerics, landed gentlemen, military officers, fanatical mad men and women have led revolutions. Not hungry peasants. Not proletarians.

Which raises the question: is it inevitable - baked into human nature - that given the chance, those who rise to the top will attempt to enslave the rest of humanity?
Is “appealing to those elites who retain a shred of common sense and common decency” to convince them to reverse course, a realistic hope?
Looking at slimy, disgusting slugs like Bill Gates and Klaus Schwab does not reassure me.

When the stupid peasants and working classes revolt against the morality of the elites and their privilege, it does not end well for the privileged ruling class or their toadies.

Yes, Liz! That is a big flaw in the writer’s argument.

I will take your word for it, Jillian, but whom did they lead?

Except in the American Revolution, the leaders roused mobs.Yes, there were peasants and laborers in the mobs. Very few violent revolutions succeeded in overthrowing a ruling class or a foreign government.

The hungry lack the energy to revolt. The stupid lack the idea.

Almost everything of value has been invented and developed by the middle classes. All real progress has been the work of middle class thinkers and doers. Eliminate the middle class and you have maharajahs who take everything for themselves and keep all others as serfs, servants, or slaves, totally subject to their masters’ will.

The middle class doesn’t simply disappear. It is forced down into the lower class. If some aristocrats and cleric and shop owners, and military men, choose to join them when they are disowned by the elites, then they are there too. So, all the lower-than-elite people, stupid or not, starving or not, working class or not, have reason to revolt.
I suppose the timing is all. Sooner rather than later.

Who is it that usually gets taken out and shot first during a revolt? It is doubtful that the guillotine would return as a useful tool.

You don’t think that would be how it goes down?

New generations are arising whose only “education” is Leftist indoctrination.

The schools from kindergarten upwards, the universities (especially their faculties of law), hundreds of thousands of civil servants (the “deep state”), the major newspapers, almost all TV channels, the entertainment industry, the tech giants and the social media they control, the medical profession, public libraries, the biggest investment corporations, the hugest multinational corporations, hundreds of leading politicians, groomed and purged armies including the US military, most writers, most publishers, most of the very rich, the UN and its agencies, the major banks, almost all the major political parties in all Western countries are “woke”. How many will there be who may “not forget” (as you have put it) what those old values of ours were?

That’s why I don’t think that even if the Republicans win both Houses in November, and regain the presidency in 2024, that our side can win. The odds against us are overwhelming. How many in the generations below yours do you know who will vote for Trump, vote against the myth of global warming, vote against late abortion bans, vote for the family, for MAGA, for individual self-reliance and against government-provided welfare? Many? A few? Any at all?

Of course I would like to be wrong about this!

The odds do appear to be overwhelming.
I think there will be a massive revolt against it, and there’s a possibility it will succeed.
But at the same time, given the unprecedented technological advances of our time, which the elite now control, its hard to know if we can beat the odds.

And, that is the difference; young adults in a small business, young adults with public school kids, younger adults that have to work for a living, pay rent, pay car payments understand the change in their lives came along with Biden.

The young people that I know are in favor of the rare, safe and legal abortion rulings.

Yet, there are more than too many, who don’t care, aren’t affected…yet… and don’t know what is going on in the world or at home.

2022 election is just the beginning that must bring real change in regulatory rulings, in cultural trends and in ESG take-overs of industry and banking. None of that is going to be easy, but that is the beginning of a long slog back. Odds are against it all.

No future is certain, no present is even certain, and the past keeps being changed by Leftists to suit their agenda. The alternatives to serfdom are none of them pretty or easy, but we know for sure that serfdom in a ESG world is going to be brutal and sorrowful.