Quote:
Amid bombshell revelations that the FBI embedded numerous informants in two militia groups accused of plotting to overthrow the government on January 6, FBI Director Christopher Wray finally is facing some heat.
During a House Homeland Security Committee hearing on Tuesday, Representative Clay Higgins (R-La.) angrily demanded to know more details about the use of FBI informants related to the Capitol protest. Higgins twice asked Wray whether FBI informants disguised as Trump supporters were planted inside the building even before protesters gained entry.
When Wray offered his usual obfuscating tap dance about protecting sources and methods—“the suggestion that the FBI’s confidential human sources or FBI employees in some way instigated or orchestrated January 6th, that’s categorically false,” he indignantly insisted—Higgins called his bluff. “It should be a no!” he yelled when Wray wouldn’t give a straight answer.
The American people should prepare for more stunning revelations about the FBI’s key role in the events of January 6. More likely than not, Wray’s latest claim that the FBI didn’t instigate or orchestrate what happened that day will be the latest in a long list of his falsehoods. 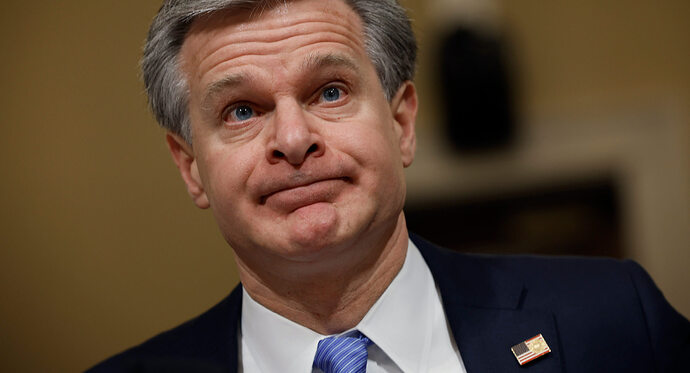 The ‘Insurrection!’ House of Cards Is Collapsing › American Greatness

Amid bombshell revelations that the FBI embedded numerous informants in two militia groups accused of plotting to overthrow the government on January 6, FBI Director Christopher Wray finally is facing…

Yes, with their rotten reputation as serial liars, who’ve already been caught conspiring against Trump in the Russia hoax, only an idiot would believe them now.
But it remains to be seen if they’ll ever get much more than the Durham treatment for their crimes.