Pope Francis is a dangerous fool

Pope Francis clasped Abayisenga’s arms. The Rwandan was the very model of the “socially deprived” people Pope Francis wanted Europe to let in. The Pope urged convents and monasteries to open their doors to migrants and refugees. Nantes Cathedral, one of the splendid Gothic cathedrals of France, took Abayisenga in, gave him the job of warden. He set the cathedral on fire. It didn’t take long for the authorities to figure out who had done it. They arrested him. Then, even though Abayisenga had already been ordered to leave France four times because his asylum requests had been repeatedly denied, he was allowed to stay, because illegal refuges must be made welcome, the Pope said. He was put into a mental hospital for a month, then released, and given shelter in an abbey under the supervision of Fr. Olivier Maire of the Montfort Missionaries. He beat the 60-year-old priest to death. For once the killer isn’t an Islamic terrorist, but the same broken system welcomed him, harbored him, failed to enforce the law, and gave him every possible opportunity to do harm. French authorities dismissed his claims to being a refugee, but they also failed to remove him. And the clergy who sheltered him failed to exercise even the most basic common sense no matter how obvious the threat that the migrant represented. There is a good reason why countries have borders and laws. Abayisenga is a reminder of that. Too many people of all religions, Catholic, Protestant, and Jewish, have become prisoners of an unbalanced rhetoric of compassion that prioritizes grandiose shows of virtue signaling over the difficult human balance between protecting ourselves and helping others. 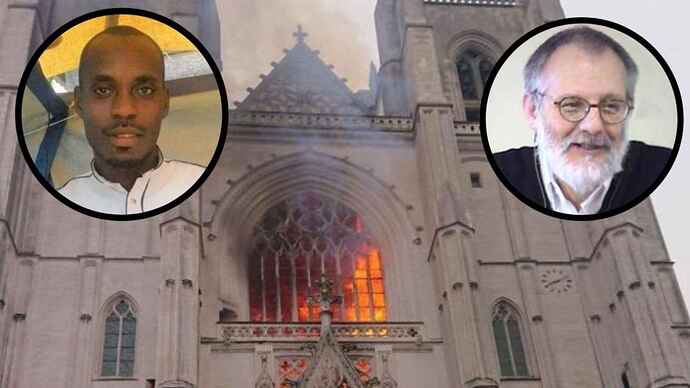 Illegal Alien Refugee Met With the Pope, Burned a Cathedral, Killed a Priest...

Europeans and Americans are paying the price for Pope Francis’ support for illegal migration.

Christians often condemn atheists for “not believing evil exists” but then they behave as if it does not…and it gets people killed.

“People who build walls…end up becoming prisoners of the walls…” What a crock!
Those that don’t build them end up becoming victims of those that they allow to invade.
Prioritize immigration over national security?
He should speak for himself, and invite the barbarians into his own palace.
He’s a disgrace to civilization, but so are the pathetic lawmakers of France.
And of the U.S. under Biden.

Or rent it as a second Guantanamo-type prison?

The depravity and stupidity of this Pope is beyond description.

As a former Catholic I concur. One might ask how he got elected and how the previous pope forced to resign.
This was deliberate move on the church’s part to veer left and support socialist causes, i.e. their interference on the border!

Mary, wasn’t the previous pope suffering dementia? But, yes…a socialist pope was what was wanted and what they chose.

When has dementia made any difference?

I seem to remember that it was very obvious and the former pope felt he needed to step down for his health. Of course, that is often a lie of convenience.