This isn’t a Chicago story. It’s a Democratic Party story.
Kim Foxx, the state’s attorney for Cook County and darling of MSNBC, has managed to increase murders in Chicago to astounding levels even at a time when we’re all getting used to astounding crime figures.
Perhaps you’ve heard about the Wild West shootout in the Austin neighborhood of Chicago two weeks ago? One group of gang members shot up the house of rival gang members at around 10 in the morning. They blasted the house with more than 70 rounds, using handguns that had been modified into automatic weapons. Their rivals fired back from inside the home, in a gun battle that lasted so long, it was still going on when the police arrived.
All of this took place in full view of police street cameras, as well as the first officers on the scene.
Of the four initial shooters, one was shot dead at the scene and left behind. The other three took off in two (stolen) Dodge Chargers. One gang member drove to a medical center, dumped his wounded comrade, then led police on a car chase ending in a fiery crash. The other Charger turned up nearby, in flames.
Police arrested the two gang members from the hospital, as well as the three gunmen inside the home.
Foxx refused to bring charges against any of them on the grounds that it was “mutual combat.”
Kim Foxx is a dangerous nut, but she’s not a random dangerous nut. She is the Democratic Party’s beau ideal of criminal justice.
Liberal moneybags George Soros has spent millions of dollars installing criminal-friendly prosecutors around the country.
The only black lives the Democrats care about are the lives of black criminals.
As dead bodies pile up in Chicago under Kim Foxx, remember: This is the criminal justice “reform” Democrats want for the entire country. 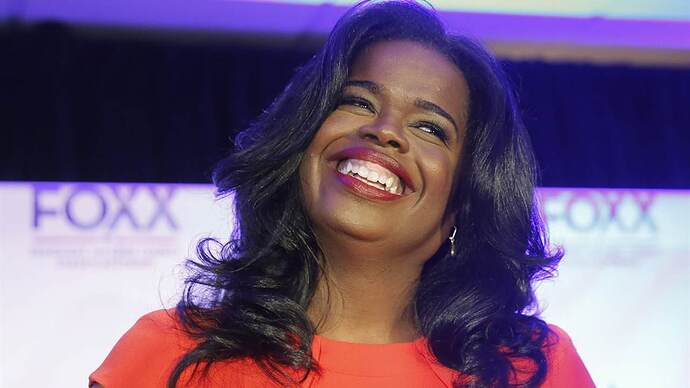 This isn't a Chicago story. It's a Democratic Party story.Kim Foxx, the state's attorney for Cook County and darling of MSNBC, has managed to increase murders in Chicago to astounding

Our cities are now on the same level as those in Mexico, terrorized by criminal gangs.
But this is what is to be expected when you let George Soros, leftists, and hordes of criminals - both home grown and from across the border - have their way. Isn’t the “open society” grand?