It was only a matter of time before a visitor was murdered in Times Square. That victim was Maria Ambrocio, a 58-year-old New Jersey cancer nurse who came to New York City on Friday to have lunch with a friend. Afterward, she and her friend were walking through the heart of New York when an alleged mugger, 26-year-old Jermaine Foster, running on foot after having just robbed one woman in her apartment and another woman on the street, slammed into Ambrocio at high speed, knocking her unconscious. She died on Saturday. “She’s gone,” her brother told the New York Post.
Ambrocio’s death wasn’t a freak accident—it was a predictable and preventable homicide. Times Square has been a mess for months. Last week, an illegally armed man accidentally shot himself while publicly urinating. The same day, a woman with a long record of similar violent, unprovoked assaults against other women shoved a stranger, another woman, into the side of a train, attempting (but failing) to kill her. In June, four muggers attacked yet another woman, stealing her phone. The same month, a 16-year-old boy allegedly shot a Marine, whom he didn’t know, in the back. In May, an illegal vendor with a violent history shot and wounded two women and a girl. Last November, a homeless man stabbed another man to death nearby. 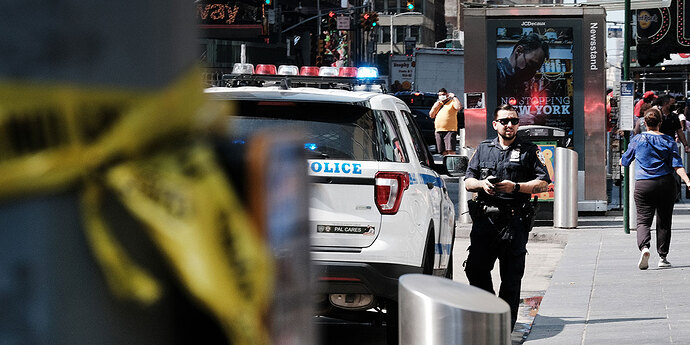 Women can’t feel safe in broad daylight at the Crossroads of the World.

Yes, all totally predictable. With a communist for a mayor, what else could anyone expect?