“America is balkanizing, its elections are going the way of the Third World, as are its people. If it’s any consolation to the party, this election showed us that the country is so deeply divided that the GOP probably couldn’t have done much better. About half the country cannot be expected to vote rationally under any circumstances.”

There is no consolation. The founders’ American Republic is done for. 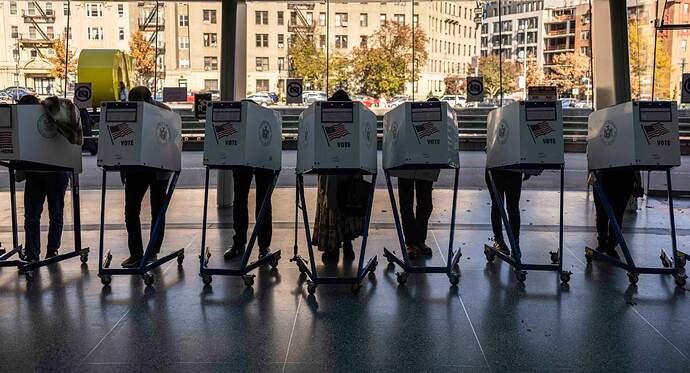 Like the Democrats after 2016, Republicans are bewildered by the results of the midterm elections and are busy searching for a scapegoat. The establishment blames Donald Trump, while MAGA blames Mitch…

Now is the Age of the Abandonment of Reason.

Where is that gentlemanly god who endowed the people of the United States with “rights” to life, liberty, and the pursuit of happiness?

Why has he not turned up to protect the rights he granted?

It must be because Believers have not prayed often enough, long enough, hard enough!

Or were the Framers of the Declaration of Independence and the Constitution mistaken? Were such rights never divinely granted?

Can a right, after all, only be granted by man-made law? And if enough voters in a democracy don’t want them, then - pouf! - they are gone.

Right to life? Infanticide is now okay. And compulsory euthanasia is coming.

Liberty? If the government orders you to have poison injected into you, you must obey.

Well I guess if 90% of the population got conned into taking the vaccine, they’re also stupid enough to vote for a commie with a malfunctioning brain.
But the article didn’t mention FRAUD, which I still think is the main problem.

Good questions. And yes, all those rights can be voted out of existence.
Christians may still be making excuses a hundred years from now, “It must have been God’s will, to punish us for our sins, or teach us a lesson”, or something…

Liz, not all who got jabbed lost their political minds or were so inclined to personal economic suicide.

But, apparently, the abortion issue was stronger than what the polls were reporting. Hard to believe that people would vote to continue the economic madness just as long a women had access to “health care” so they could kill their babies.

And…most states had “reasonable” regulations on abortion, I thought. A couple pushed to only rape, incest, health of mother…didn’t they?

Oh maybe it was the old “Republicans will destroy medicare and social security” that worked again.

Chesse and Rice! I thought more people were waking up.

Liz, I don’t think Christians will be making excuses for God. They know full well that it is the human failure of decades, which brought this result. Apathy, tolerance for Leftward nudges, lies of the Left, stupidity of racial political divide, lack of integrity, the inroads into culture and education that has been pushed upon the children because parents fell into the “need for a second income” over a nurturer making a home.

God is not in charge of that…humans are, and if Christians fault anything, it should be what we all fault…human apathy and ignorance.

Jeanne, I was not including you in the “stupid” remark! Too trusting, maybe, but not stupid.
I’ve been too trusting of the government in the past, myself. (Such as, “if the FDA approved it it must be ok!”)
Yes, most Christians will blame themselves, at least partially, for some failures. They just won’t allow any failure to give them a clue that God may not be in control, due to his non-existence…

God’s will is always a win-win deal, which devout Christians accept as a plan greater than theirs. Painful, but apparently comforting to give control of their lives over to a loving, all-knowing and all-powerful father figure. And, they prefer that comfort to having to figure it all out for themselves, take action and the credit for positive outcomes, but blame for negative outcomes.

That’s just the way it is.

On the shot; two of my neighbors in two families had just died from Covid and one was handicapped with lung ailments after nearly dying. Of course we got the vaccine when it was available, especially since we had auto-immune members of our household. That was then. This is now. It is a different world with the virus, now.