It Begins - the Empty Shelves

White House Press Secretary Jen Psaki said Tuesday what has been obvious for quite some time: “The president wants to make fundamental change in our economy, and he feels coming out of the pandemic is exactly the time to do that.” CNN is already laying the groundwork for this, preparing Americans for one of the foremost hallmarks of socialist regimes the world over: empty supermarket shelves. On Sunday, the Leftist propaganda organ masquerading as a news source published a lengthy article entitled “Grocery store shelves aren’t going back to normal this year". Or, from the looks of things, after that, unless the Leftists in the American government are thrown out of office in 2022 and 2024 and decisively repudiated.
CNN was up front about disappointing Americans who are still optimistic that some day this will all end: “If you hoped grocery stores this fall and winter would look like they did in the Before Times, with limitless options stretching out before you in the snack, drink, candy and frozen foods aisles, get ready for some disappointing news.”
The Before Times — is that before the pandemic, or before socialist Democrats came to dominate their party and the government? Either way it’s the same, and it means there will be fewer groceries available.
All this Sovietization of American supermarkets put me in mind of Boris Yeltsin, the first president of post-Soviet Russia from 1991 to 1999. In September 1989, just before the Berlin Wall came down, Yeltsin was mayor of Moscow. He made an official visit to NASA in Houston. During the trip, he said that he wanted to see what life in America was really like. In order to do so, he headed to Randall’s, a Houston supermarket. According to the Houston Chronicle’s Stefanie Asin, Yeltsin roamed the aisles of Randall’s nodding his head in amazement. He told his fellow Russians in his entourage that if their people, who often must wait in line for most goods, saw the conditions of U.S. supermarkets,“there would be a revolution”. 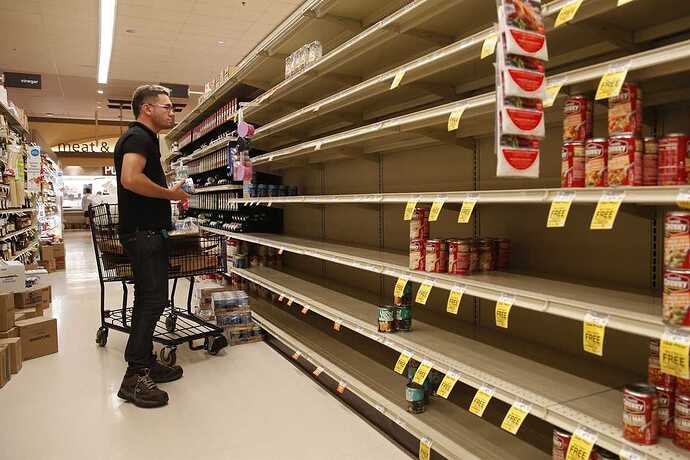 It was a grocery store that made Boris Yeltsin realize that communism was a lie. Now if we could only convince CNN. And The Squad.

Unreal. That they’re doing all this right out there in front of us, announcing it, and we’re allowing it to happen. Yes, people are objecting to it, getting fired, arrested, canceled…and it just keeps going.