Going Gayly Into That Goodnight

A video full of interesting and important information.

The Rainbow Flag is a “symbol of the destruction of our society”. Yes. 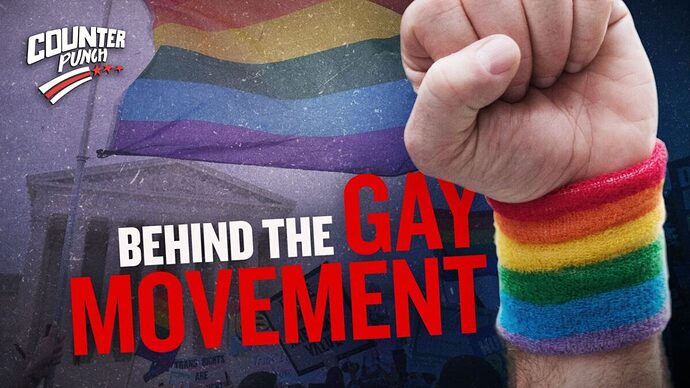 The Communist Origins of the Gay Rights Movement

Pride month is big business—if you're a business, if you’re in government, you have to display the flags ...

Yes, all of this garbage we’re being bombarded with, going back to the first “counterculture” movements of the 60’s, accompanied then, as now, by lots of drugs, is the brainchild of Communists working to undermine and destroy our society.
It turns out Mccarthy, for all his efforts, was just the kid holding his finger in the dike before it burst.

The modern LGBT-whatever movement (they seem to add an additional letter every other week) is not about gay rights. There are no enforceable laws in the US which target homosexuals, so there are no true rights which must be won. The movement is all about destroying the rights of others, about destroying free speech and free thought.

As a self-described libertarian (on my own terms; I disagree with many positions held by those who claim to represent the US libertarian movement), I have absolutely no problem with anything that happens between two (or more) consenting adults. Two dudes want to get married? Have at it. Want to have several spouses? Sure, whatever. Want to marry your sister? Hey, if she’s ok with it, it’s none of my business.

What I do have a problem with is being attacked for voicing my opinion that such behavior is disgusting. Thinking about two guys having sex with each other makes me queasy, and that’s my right. By all means, marry who you want, but if a third party isn’t comfortable making your cake, get your damn cake elsewhere instead of trying to ruin someone’s life and livelihood.

The movers and shakers behind the LGBTABCDEFG movement want their “rights”, but they don’t want rights for anyone else. They want to make display of the “pride” flag mandatory, but want to ban the Gadsden flag. They want to expose children to their perverted lifestyle, but want to ban depictions of a traditional nuclear family. They are thugs and bullies.

I doubt the movement would have gotten very far without financial support: 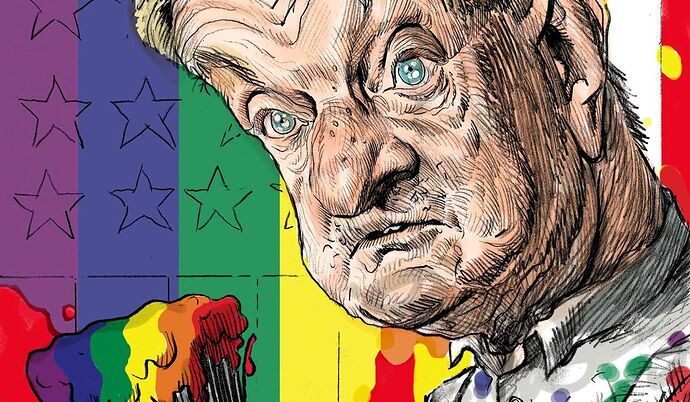 George Soros: The money behind the transgender movement

Three years ago, a Supreme Court ruling paved the way for gay marriage.

The Guardian admits it’s not just Soros as well: 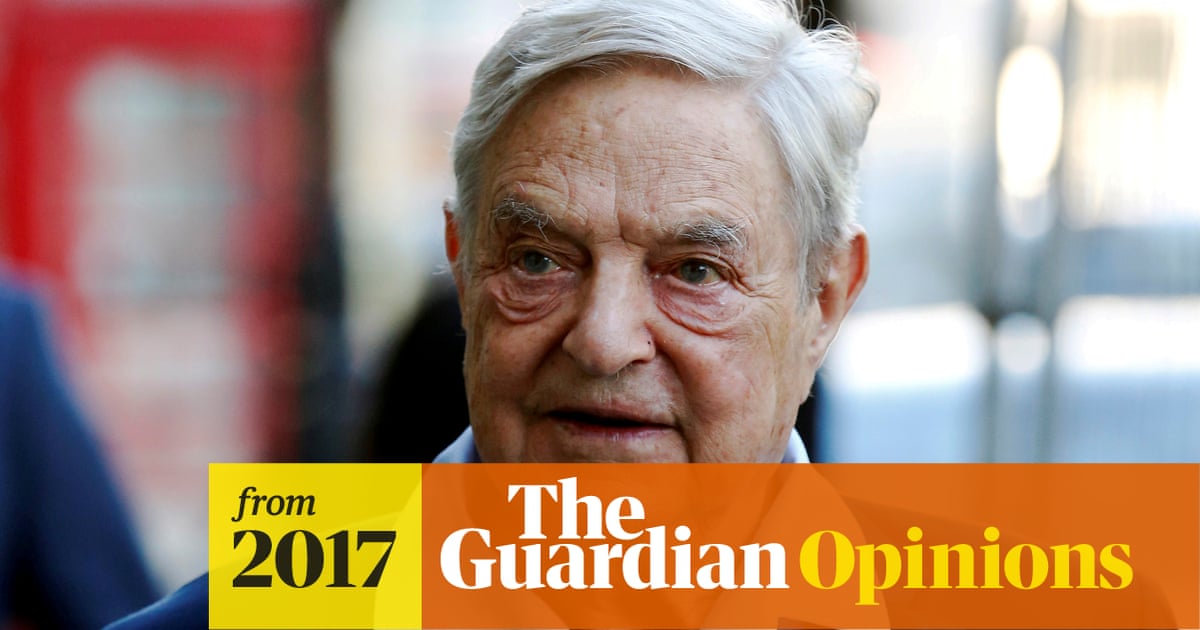 Why is George Soros being dragged into Australia's same-sex marriage debate?...

The question that we can’t answer is, why on earth are these rich people trying to destabilize our society in this way? Everywhere I go in the UK I see rainbow flags associated with messages about the National Health Service, they are promoting LGBTQI and making it difficult for people to object by associating the symbol with the NHS (it’s practically heresy to criticize the NHS).

Then there’s the BBC, which has an article something about gay this gay that, or a story about a transgender person on the front page virtually every day. Today’s front page example: 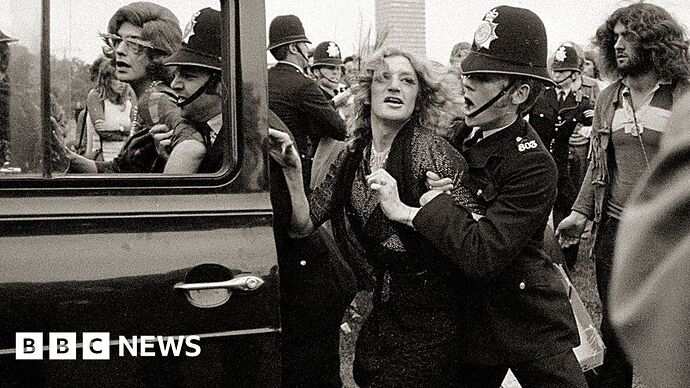 Pride at 50: The LGBT revolution sparked in a basement

The ripple effects of the Gay Liberation Front's 1972 march are still being felt.

The agenda is not primarily being pushed by the LGBTQWERTY crowd themselves in other words, this is coming from above.

I wish you could hear me applauding your entire comment!

No one could be more anti-semitic than George Soros himself. He actively helped the Nazis pursue their genocide of the Jews.

Soros with his minions and allies, and the conspirators of Davos, and academia, Hollywood, most of Big Tech, the BBC and MSNBC etc., and even self-styled “conservative” governments are hellbent on destroying life, liberty and the pursuit of happiness by means of abortion, infanticide, transgendering, pedophilia, poisonous vaccines, fentanyl, massive migration, suppression of free speech, arbitrary incarceration of political opponents, extreme intimidation by police action, deliberate impoverishment by economic manipulation, food shortages, rationing of water and electricity, and so on.

Is there an answer to WHY?

I’m feeling inclined to speculate about things less now and focus on the known knowns more, but I’m still of the view that it’s actually quite simply a push to humiiliate and control us and turn us into modern day serfs.

OK well one explanation that has occurred to me is that power is like a drug, the more of it you get the more you want. So the richest and most powerful, finding that their power is now greater than the power of governments, are free to continue acquiring more and more power over the rest of us without limits, and because they are addicts they just continue recklessly onwards. This would explain why these ultra rich people are so brazenly committing prosecutable crimes such as fraud and manslaughter/murder (the Jeffrey Epstein case also springs to mind).

In a strange way this gives me hope, because if they are addicts who can’t moderate their own behaviour, then eventually the likelihood is that they will go too far and push the serfs to a real rebellion. The bad news is that we’re a long way from that point today in my estimation, and so things are going to get a lot worse before the tide starts to turn. By the time that does occur, society may have descended into real violent chaos, and many of us may not survive.

The other bad news is that times of real chaos aren’t normally followed by periods of genuine progress and stability, e.g. the French Revolution was followed by tyranny, and ditto the Russian and Chinese Revolutions. 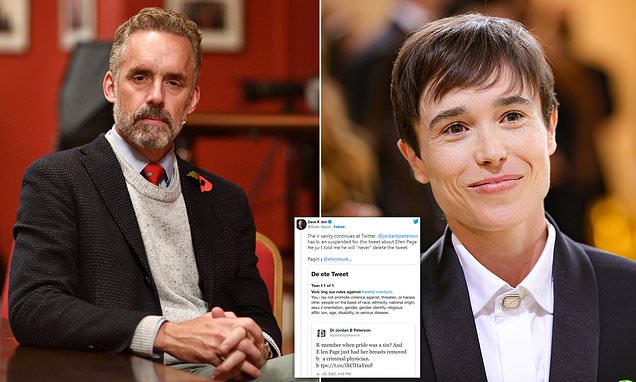 Jordan Peterson was suspended from Twitter after he sent out a tweet about transgender actor Elliot Page.

Jordan Peterson is a hero in the gender war.

He is deeply serious. Brilliant.

A pity he is also a mystic!

“The movement is all about destroying the rights of others” - exactly! That’s all it’s ever been about.

I’ve been reading about how the CIA experimented on people, without their knowledge or consent, with various drugs and hypnosis back in the 60’s, with the excuse of “saving our democracy” from Communists who were doing the same thing.
Now they’re doing it to “save our democracy” from “right wing extremists”!
The obsession with manipulaton, mind control, and just plain CONTROL in general has been their goal for decades, is worse now, and is shared by our globalist overlords. They have no qualms about imposing experimental “population control” drugs, disguised as “vaccines”, on an unsuspecting populace, not to mention collapsing the world’s entire economic system, to achieve power.

Are they driven by intention to do evil? The instinct of sadists? A passion for destruction?

They want power, but power to do what? To make their serfs suffer?

Yes, it’s all of the above.
But it’s fine, because it’s for “the greater good”!