Quote:
“It is outrageous to think that the Chinese police would attempt to set up shop, you know, in New York, let’s say, without proper coordination,” FBI Director Chris Wray told a Senate Homeland Security committee hearing about a Chinese police station operating in New York City.
According to Wray, the FBI was “looking into the legal parameters” of a Communist security force running operations in one of America’s centers of finance and technology. As if the issue with an enemy nation putting boots on the ground in one of our cities is the lack of “proper coordination”.
The Biden administration sharply constrained the ability of government agencies to go after Communist China.
Earlier this year, Biden’s DOJ shut down the China Initiative, falsely implying that it was racist.
The president and his criminal family have been paid millions by the Chinese Communists. For what? What exactly is the quid pro quo for the millions that wound up in Biden’s pockets? No one with the power to investigate or prosecute is asking.
During his meeting with the Communist dictator, Biden asked Xi about global warming, but failed to discuss China’s hacking operations, drug smuggling or operations on American soil. That’s not even appeasement, it’s treason.

Yes, it is treason. Biden and the rest of this government are bought and paid for by the CCP.
Just as they don’t seek to prevent, but to “coordinate” with these police, they don’t seek to prevent the border invasion, but to “manage” it “humanely”. Destroying the country.
And funnel trillions of dollars to dictatorships around the world, including China, for “climate change” “reparations”.
Of course none of these traitors bothers to get permission from the taxpayers to squander our money on this scam, or anything else they do.

Quote:
[In addition to the FBI] the Biden junta can also count on the forces of Antifa, BLM, and freelance criminals, willing to burn, loot, and murder. For Biden, Antifa was only an “idea,” not a militia, extremist group, or domestic terrorist organization. During the worst of the violence, the FBI looked the other way, and now deploys massive force and military weapons while arresting peaceful pro-life protesters.
According to The Black Book of Communism, the Chinese Communist regime murdered more than 60 million people, the most domestic casualties of any nation, and far surpassing Joseph Stalin’s Soviet Union. Biden believes the Chinese Communists are “not bad folks” and the Delaware Democrat sees the greatest threat from those who want to make America great again.
This demented misanthrope has the forces for mass political violence at his disposal. As Americans protest his destructive policies, don’t be surprised if the tanks roll, the bullets fly, and the bodies fall. 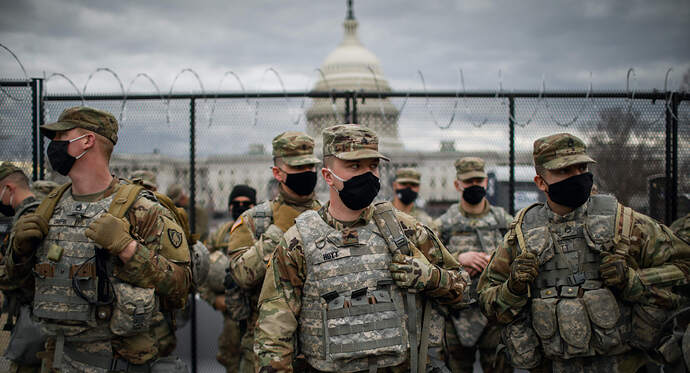 “Every tyranny must decide whether to rule by brutal force or by persuasion,” contended Josiah Lippincott on November 5. “Brute force isn’t an option for the modern Left. They lack the Soviet talent…

Yes, Ruby Ridge and Waco were wake up calls.
Then 9/11, which proved, at the very least, that those assigned to protect us weren’t doing their job. Now it’s clear that they are actively working against us.