Climate Reparations: Penance for the Sin of Being Prosperous

Quote:
The use of climate policy to soak Americans keeps getting worse, and the United Nation’s climate conference in Egypt ended this weekend with agreement on a new fund to pay reparations to poor countries. Welcome to the latest climate shakedown. The U.S. and Europe are conceding the principle that their emissions cause climate damage even though there isn’t a definitive link between rising CO2 levels and natural disasters such as the monsoon flooding in Pakistan this year.
All of this ignores the benefits for humanity, rich and poor, that economic growth spurred by capitalism have provided. American taxpayers are being asked to pay because the U.S. industrialized first and then lifted billions of people out of poverty via investment and trade.
House Republicans won’t appropriate money for the fund, but the Administration could tap international development banks that the U.S. funds. Next time Democrats control Congress, they will argue that the U.S. has an obligation to pay reparations, as they argued that the Inflation Reduction Act’s climate spending is necessary to meet the Paris commitments.
Countries might also shake down U.S. fossil-fuel producers in their own courts. Climate reparations will merely serve as another form of global income redistribution. The Biden Administration’s surrender shows again that the religion of climate change is progressive penance for the sin of being prosperous. 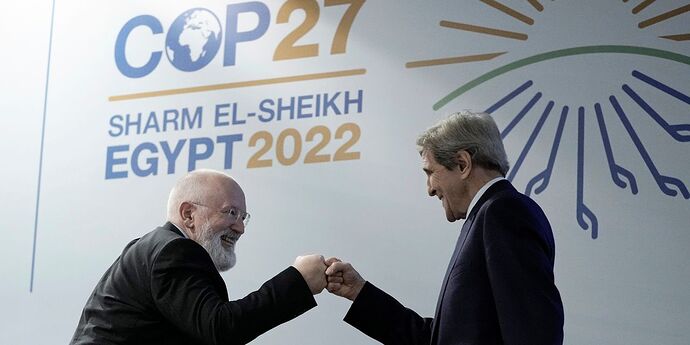 The latest shakedown is a new fund to pay poor countries for supposed damage caused by Western use of fossil fuels.

What a joke. Our entire government, under the Democrats and Rinos, is one big shakedown operation on the people.