Or will she choose to burn in hellfire for all eternity? That’s the choice the Catholic Church offers her.
Thrilling? Can’t wait to see what she decides?

Quote:
Archbishop Salvatore Cordileone of the Archdiocese of San Francisco announced that Pelosi is to be excluded from Holy Communion in a Friday letter.
“Unfortunately, Speaker Pelosi’s position on abortion has become only more extreme over the years, especially in the last few months,” said the archbishop, explaining his actions.
“After numerous attempts to speak with her to help her understand the grave evil she is perpetrating, the scandal she is causing, and the danger to her own soul she is risking, I have determined that the point has come in which I must make a public declaration that she is not to be admitted to Holy Communion unless and until she publicly repudiate her support for abortion ‘rights’ and confess and receive absolution for her cooperation in this evil in the sacrament of Penance,” announced Cordileone. He emphasized that the action is intended as a pastoral, rather than political, measure.
If Pelosi wanted to receive Communion, she’d have to present for the sacrament of Confession and repent of her decades-long support of abortion. 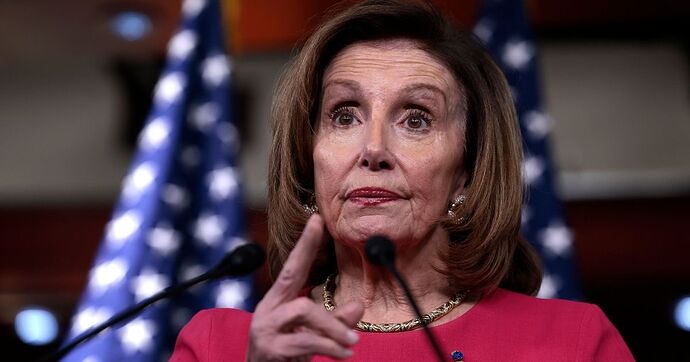 Archbishop Salvatore Cordileone announced that Nancy Pelosi is to be denied communion in his district, citing her abortion support.

Ha! Yes, at worst, she faces hell. At best (even if she’s not worried about hell) she still faces the embarrasment of either having to pretend to repent, or not repent and be exposed as a hypocrite.

Right. Well put, Liz! It will be fun to see which she chooses.