If we are on the brink of nuclear “Armageddon”, as the dazed old scoundrel in the White House claims, it must not be forgotten that the “reset” of US relations with Russia, which his boss and the evil Hillary started, has a lot to do with the growing man-made heat of war. President Trump stopped it, but Biden resumed it.

Victor Davis Hanson writes:
The irony is that while Trump was later smeared by the Obama-Biden Left as a “Russian asset”—in the words of former Director of National Intelligence James Clapper who himself had confessed to lying under oath to Congress—he managed to overturn the reset in comprehensive fashion.
Trump vacated an asymmetrical and calcified anti-missile treaty with Russia. He upped sanctions on Russian oligarchs. He ordered lethal retaliation against Russian mercenaries in Syria. He flooded global markets with cheap U.S. oil and gas at Russia’s expense. He eventually sent deterrent offensive weapons to Ukraine—once canceled by the Obama Administration. Trump upped the Pentagon budget and controversially jawboned NATO members to increase their defense expenditures.
In contrast, it was Hillary Clinton—and the American FBI—who hired Russian informants like Igor Danchenko and their conduit Christopher Steele to spread dirt during the 2016 election. The Russians likely feared the unpredictable “America First” Trump and were only too eager to see the Left lap up its concocted, seedy “Kompromat” on him.
Recall that the projectionist Secretary of State Clinton had earlier further appeased Russia when her State Department approved the sale of the North American company Uranium One’s uranium holdings to the Russian-government-controlled company Rosatom—the same company that recently stole the Ukrainian-owned nuclear plant at Zaporizhzhia, Europe’s largest nuclear generator. It was also about this same time … millions of dollars from Moscow-affiliated companies suddenly flowed into the Clinton Foundation coffers.
How strange then that we now totter on the brink of a full-throttled war with nuclear Russia over Putin’s latest aggressions in Ukraine. All the while we apparently forget that the Trump Administration never colluded with Russia, was tough in action rather than verbiage with Putin, and thus remained the only one of the last four administrations during which Vladimir Putin did not invade a former Russian republic. … [V.D.H.'s emphasis]
Obama and Biden long sought to placate Putin to help with their puerile Mideast agendas. They invited him into Syria. They made him the key player in their pursuit of the Iran deal. And they ignored his 2014 invasions of Eastern Ukraine and Crimea.
How ironic that we now find ourselves sending arms to protect Ukraine … having given up an Eastern European missile defense system to counter Putin’s nuclear threats—even as we coax both our enemies Tehran and Moscow into cementing a nuclear deal that will be as disastrous to our friends as it is to ourselves. 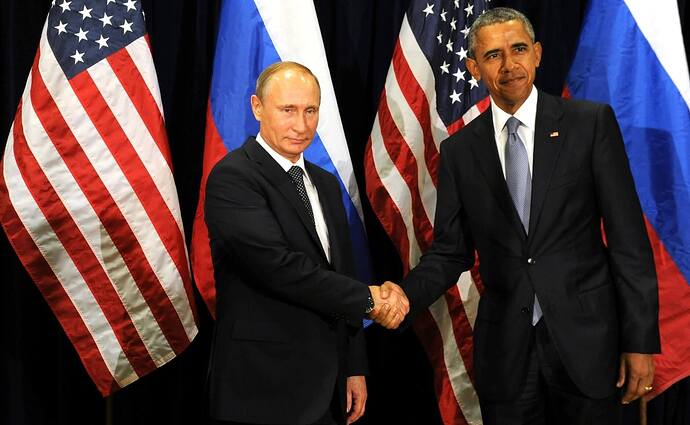 Ukraine and the Malevolent Legacy of the Obama-Biden Administration ›...

During the current Ukrainian war, the media has created a mythology that the Left was tough on Vladimir Putin’s Russia. And thus, now it simply continues its hard-nosed efforts in Ukraine.

Yes, as always, our problems are caused by the traitors on the left who invariably appease, aid and abet our enemies, rather than pursuing the tried and true approach of peace through strength, as Trump did.