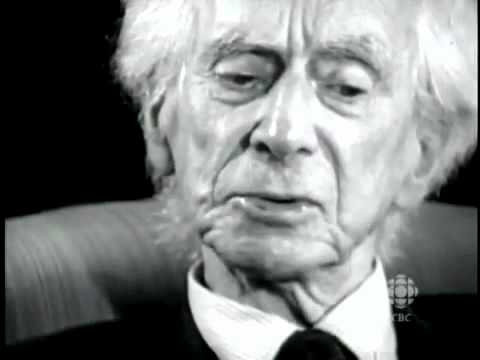 That’s a great clip! I didn’t know there was any film of him. Very gracious, but matter-of-fact about it.

He speaks remarkably clearly and simply and therefore cogently. Wonderful clip. Thank you for posting it.
I periodically dip into his short piece "Why I am Not a Christian"which continues to illuninate and inspire.

This quote from Thomas Paine is quite apt:

“Yet he cannot conceal his contempt for the most central tenet of Christianity, which is the morally hideous concept of scapegoating or ‘vicarious atonement‘: If I owe a person money, and cannot pay him, and he threatens to put me in prison, another person can take the debt upon himself and pay it for me. But if I have committed a crime, every circumstance of the case is changed. Moral justice cannot take the innocent for the guilty even if the innocent would offer itself. To suppose justice to do this, is to destroy the principle of its existence, which is the thing itself. It is then no longer justice. It is indiscriminate revenge.6 In other words, to hope to throw your sins upon another, especially if this involves a human sacrifice, is a grotesque evasion of moral and individual responsibility.”

Wow, that is excellent!
It exposes an aspect of human psychology that is obscure, yet must explain why believers easily overlook this “grotesque evasion of moral and individual responsibility” that is so central to Christianity.

The most refreshing conversation that I have possibly ever seen. Thanks for posting it. Thank you, Bertrand Russell for speaking it.

Thanks for that quotation, Cogito.

What a terrible thing to do, if anyone ever did it - to have oneself tortured to death and claim that by doing so one is “saving” everyone else. Putting everyone in one’s debt. (“He bought you for a price,” the author of the Christian religion, St. Paul, says of Jesus.) Make all those who care feel horribly guilty.

Of course, in addition to that, the flaws in the story are overwhelming. If he was God, as they claim, he could have stopped the agony at any time he chose. He gave himself as a sacrifice, and yet the Jews are to blame for it. He came to earth to be crucified, and yet it was wicked of Judas to betray him. He “redeemed” mankind, yet everyone will be judged and many condemned to Hell.

St. Paul and his converts were not intelligent men.

Yes, the Bible (Old and New Testaments) is studded with laughable inaccuracies, irrational superstitions, spirit crushing immorality, and, as noted by Paine, the very crux, as it were, of the faith is utterly contemptible notion of substitutionary atonement,

"Boswell had been to visit David Hume under these conditions, because he had been reluctant to believe that the stoicism of the old philosopher would hold up, and as a result we have one excellent account of the refusal of the intelligence to yield to such moral blackmail. Our other account comes from those who attended Paine. Dying in ulcerated agony, he was imposed upon by two Presbyterian ministers who pushed past his housekeeper and urged him to avoid damnation by accepting Jesus Christ. ‘Let me have none of your Popish stuff,’ Paine responded. ‘Get away with you, good morning, good morning.’ The same demand was made of him as his eyes were closing. ‘Do you wish to believe that Jesus Christ is the son of God?’ He answered quite distinctly: ‘I have no wish to believe on that subject.’ Thus he expired with his reason, and his rights, both still staunchly defended until the very last.

Sounds like a good book, I’ll have to read it now! I love Paine’s “The Age of Reason”.

This sounds like a good one for my library and to read. Thanks, Cogito.