America's Governor Should Be America's President 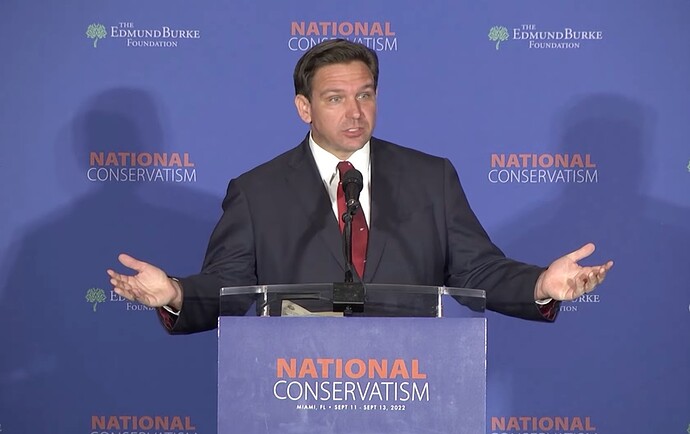 Florida Gov. Ron DeSantis gave a sweeping speech at the National Conservatism Conference in Miami in which he touted Florida's many successes and slammed global elites.

I prepared a post with that very link, Cogito. Had actually posted it when I saw that you had just done so.

Here’s an extract from that inspiring speech:

“There are some people that criticize us in Florida because we’ve taken action to stand up to big tech companies. They say, you know what, it’s private. Let them do kind of what they want to do. [But] they cannot be viewed as private entities, given that we know without a shadow of a doubt, they are doing the regime’s bidding when it comes to censorship. From the minute you’re doing the government’s bidding, you’re essentially an arm of the state. And not only are you not ‘private’, you have to abide by the First Amendment,” DeSantis asserted.

I agree that DeSantis should be President. After Trump’s second term.

I read that Oliver Stone is saying he’s going to run.
I hope he doesn’t run against Trump.

Would Oliver Stone get any votes?

Sorry! I meant that Stone was saying that about De Santis, not himself! And maybe I’m getting his name wrong, because he’s not dead…

I don’t know, have you seen him lately?

Aha! I don’t think he is dead… just missing, perhaps.

Or possibly as Trump’s VP?

Here is my take on it, Cogito. It is much as Virgil told his fellow Republican candidates (the ones that were trying to unseat the incumbents) before the primary, “You know that this is only for one term, right?” He explained that if they did what they had to do to set the county right and protect it from what was coming, they would make powerful enemies and would not be re-elected.

That is what Trump has to do. DeSantis needs to be able to come in free from that necessary shake up, which Trump has to do…and I believe which only Trump can do. Blessings on whomever will be his VP. I doubt that he or she will survive politically to run for president in the near future. They will have to accept that the office this time will be one of sacrifice.

That is what I think it will take to save America. Save America… save the world.