A Californian Racist Bill Struck Down

Assembly Bill 979 (AB 979) required boards of directors of California-based corporations to satisfy a racial, ethnic, and LGBT quota by the end of the 2021 calendar year. Judicial Watch, in a lawsuit against AB 979 filed October 2, 2020, noted in its motion for summary judgment:
“Laws that explicitly distinguish between individuals on racial or ethnic, sexual preference, and transgender status grounds fall within the core of the prohibition of the equal protection clause.”

Judicial Watch’s attorneys successfully argued, “AB 979 plainly embodies stereotypes that treat individuals as the product of their race, ethnicity, sexual orientation, or transgender status, evaluating their thoughts and efforts—their very worth as citizens—according to criteria barred to the Government by history and the Constitution.” And that “racial balancing” is not transformed from “patently unconstitutional” to “a compelling state interest” simply by relabeling it “racial diversity”. 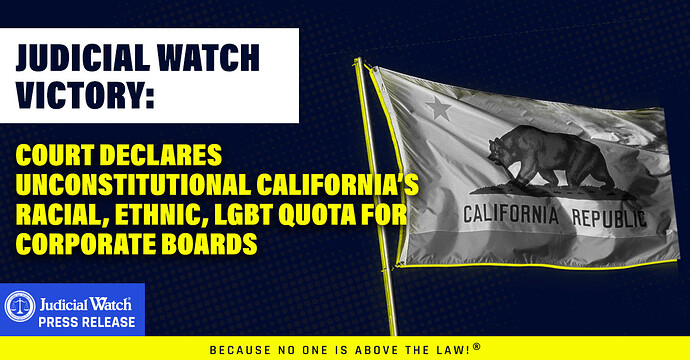 Judicial Watch announced today that a California court ruled unconstitutional the state’s racial, ethnic, and LGBT quota for corporate boards of directors (Robin Crest, et al. v. Alex Padilla, in his official capacity as Secretary of State of the...

That’s great - its just a crying shame that it took a Judicial Watch lawsuit to FORCE these a**holes to acknowledge the obvious.