Robert F. Kennedy’s book “The Real Anthony Fauci” was not reviewed in any publication of note, including most media on the Right. Yet it quickly became a best seller.

Quote:
The densely argued and painstakingly documented history of Anthony Fauci’s career—spanning 50 years as a top public health official and including his central role in corrupting the entire medical and scientific research establishment—quickly rose to No. 1 on Amazon (it is still on the bestseller list) and sold over 1 million copies, according to the publisher. That’s an astonishing feat for any book on public affairs, much less a heavily footnoted (though highly readable) 480-page account of personal and institutional corruption.
It seems that after two years of gaslighting, self-contradictory pronouncements, and transparently absurd lies about everything related to the COVID pandemic from the Fauci-controlled public health establishment, there was an enormous appetite among the American people for an account that would explain the catastrophe they had experienced and the reasons for the obvious deceptions to which they had been subjected.
Central to Kennedy’s book is the account of the deep financial entanglements between Big Pharma and the government health agencies ostensibly responsible for the industry’s regulation. Fauci personally benefited from the “regulatory capture” of the government health agencies that Kennedy documents, both in terms of the power he accrued to himself as a result of the control he exerted over scientific and medical research purse strings, and because of the Big Pharma revenue streams he created for his own National Institute of Allergy and Infectious Diseases (NIAID) and numerous other federal health agencies.
Among the shocking revelations documented in The Real Anthony Fauci are the Big Pharma and other private source funding streams that Fauci established to greatly enlarge the budget of NIAID and other federal health agencies in the name of “private-public partnerships.” Among the book’s bombshells:
• The CDC owns 57 vaccine patents and spends $4.9 billion of its $12 billion annual budget (as of 2019) buying and distributing vaccines
• High level NIH officials, including Fauci, receive up to $150,000 in royalty payments on drugs and vaccines they help develop and usher through the approval process
• Between 2010 and 2016, every drug that won approval from the FDA—210 different pharmaceuticals—originated from research funded by the NIH.
• From his position at NIAID, Fauci now dispenses an astounding $7.7 billion annually in the form of research grants—including $1.7 billion funneled annually from the Defense Advanced Research Projects Agency (DARPA)—a power he uses to reward those who do his bidding and to defund, bully, silence, and ruin scientists whose research threatens the pharmaceutical paradigm
• His control over this astonishing budget has given him dominance over federal agencies, world governing bodies, and private foundations including the Centers for Disease Control and Prevention (CDC), the Food and Drug Administration (FDA), Health and Human Services (HHS) agencies, the National Institutes of Health (NIH), the Pentagon, the White House, the World Health Organization (WHO), the United Nations, the Clinton and Gates Foundations, and Britain’s The Wellcome Trust.
• By 2020, Big Pharma was spending approximately $10 billion per year for advertising on mainstream media networks, with a focus on news networks.
• The FDA receives 45 percent of its budget from the pharmaceutical industry, through what are euphemistically called “user fees.”
No wonder Fauci stooped to the calumny of questioning Kennedy’s sanity rather than attempting to answer any of his specific allegations of corruption and conflict of interest. He knew that it was a losing battle to engage with the book’s thoroughly documented history of his own egregious grift. 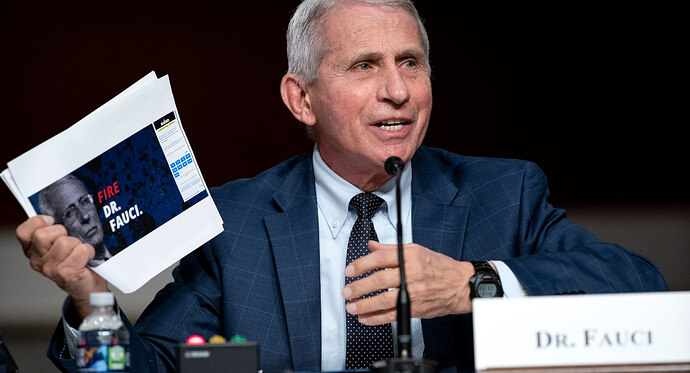 When Robert F. Kennedy, Jr. published his book The Real Anthony Fauci in November, the fact that it was met with near-total silence from the media was hardly surprising. After all…

Wow. The extent of the corruption is just mind boggling. It rivals the Clintons, the Bidens, and even Soros! He’s literally “the little man behind the curtain” of corrupt government.
I hope his arrogant claim to “represent the science”, as the ultimate authority on the pandemic (that he helped create, and which he profits off of) that has brought him under such scrutiny in this book, will be his undoing.